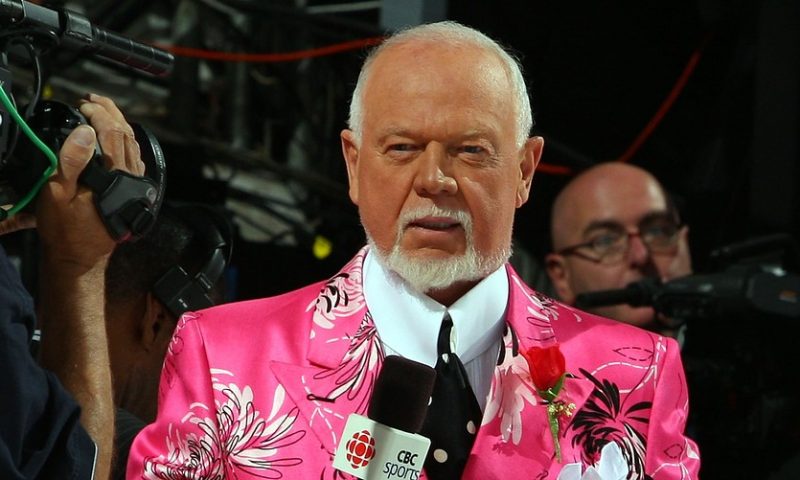 ‘Hockey Night in Canada’ commentator railed against ‘you people’ on Saturday

TORONTO — Don Cherry, Canada’s most polarizing, flamboyant and opinionated hockey commentator, was fired Monday for calling immigrants “you people” in a television rant in which he said new immigrants are not honoring the country’s fallen soldiers.

“It has been decided it is the right time for him to immediately step down,” Yabsley said in a statement. “During the broadcast, he made divisive remarks that do not represent our values or what we stand for.”

The tradition of wearing poppies in Canada honors the country’s war dead on Remembrance Day, which was observed Monday.

Cherry has provided commentary following the first intermission of “Hockey Night in Canada” for more than three decades.

Known for his outlandish suits, Cherry often mangled the names of foreign-born players over the years and occasionally weighed in with thoughts on politics.

“Don is synonymous with hockey and has played an integral role in growing the game,” Yabsley said. “We would like to thank Don for his contributions to hockey and sports broadcasting in Canada.”

The National Hockey League said in a statement that Cherry’s remarks were “offensive and contrary to the values we believe in.”

“Don Cherry made remarks that were hurtful, discriminatory, where flat-out wrong,” MacLean said. “I owe you an apology too. That’s the big thing I want to emphasize. I sat there, I did not catch it., I did not respond.”

MacLean didn’t object to Cherry’s remarks Saturday and gave Cherry a thumbs-up during the broadcast.

In his remarks, Cherry complained that in downtown Toronto “nobody wears a poppy” and in small cities they do.

Cherry stood by his remarks after learning he had been fired.

“I know what I said and I meant it. Everybody in Canada should wear a poppy to honor our fallen soldiers,” Cherry told the Toronto Sun newspaper. No explanation was provided for his “you people” comment.

The Canadian Broadcasting Standards Council said it was so overloaded with complaints about the segment that it exceeded the organization’s technical processing capacity.

“The comments made Saturday on Coach’s Corner were clearly inappropriate and divisive, and in no way reflect Budweiser’s views,” says Todd Allen, vice president of marketing for Labatt Breweries of Canada, which has Budweiser as one of its brands. “As a sponsor of the broadcast, we immediately expressed our concerns and respect the decision which was made by Sportsnet today.”

Before beginning his life in front of the camera in 1980, Cherry was a rugged defenseman and career minor leaguer. He played all of one game in the NHL — a playoff game with the Boston Bruins, with whom he won coach of the year honors in 1976.

Cherry was voted the seventh-greatest Canadian on The Canadian Broadcasting Corporation television project, The Greatest Canadian, in 2004. He finished ahead of Wayne Gretzky and Canada’s first prime minister Sir John A. MacDonald.

That same year, Cherry was publicly reprimanded by the CBC and subjected to a seven-second tape delay when he said only “Europeans and French guys” wore visors.

In 2013 Cherry said he was against women reporters being allowed in NHL dressing rooms. Last year he asked his co-host McLean if he and his “left-wing pinko friends” could explain their concerns over rising global temperatures while Toronto was experiencing a cold snap.

The Royal Canadian Legion, which raises money through the sale of poppies, said Cherry’s “personal opinion was hurtful, divisive and in no way condoned by the Legion. We do remain appreciative of his passionate support for Veterans.”

“We know many new Canadians understand and welcome the tradition of the red poppy and will continue to educate all citizens about the significance of this powerful symbol,” the statement said.