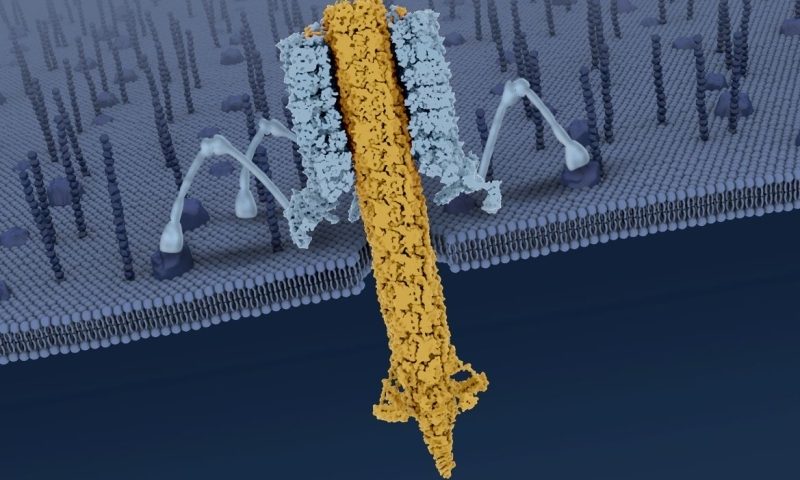 Widely prescribed broad-spectrum antibiotics such as amoxicillin can kill off many types of bacteria indiscriminately, including harmless strains. But that can lead to resistance that bugs can pass on to other pathogenic bacteria. Compounds that target specific bacterial infections instead could help combat the problem of antibiotics resistance.

In a new study published in Nature, a team led by scientists at the University of California, Los Angeles, described the key structural mechanism of action for a class of naturally occurring bacteria-killing proteins called R-type pyocins. They believe their findings could aid in the development of more precise antibacterial agents.

Using X-ray crystallography and cryo-electron microscopy, the researchers imaged pyocin and determined how its killing power is triggered.

Previous studies had revealed that a pyocin consists of a cylindrical trunk made of an outer sheath that surrounds an inner tube. Below the trunk is a baseplate with six tendrils, which recognize and bind to specific structures on the target cell’s surface as the inner tube punctures and kills the cell.

In the new study, the researchers found that the bacterium is recognized when at least three of the six tendrils bind to its surface. This causes the baseplate to detach from the main body, triggering a cascade of events that forces the inner tube across the bacterial cell surface.

“This is a mechanical system that’s exquisitely tuned to couple specific recognition of a target cell with deployment of its lethal blow,” Miller said in a statement. “Understanding how the system is constructed and how its activity is controlled could be used for building new kinds of nanomachines.”

Pylum was created from a split-up of AvidBiotics in late 2017. While Pylum focuses on precision anti-bacterial technology, its sister company, Xyphos, designs CAR-T therapies that can be switched on with bispecific antibodies. Xyphos was recently bought up by Astellas for $120 million.

Pylum’s lead candidate targets C. difficile. In a 2017 study published in Science Translational Medicine, the company helped demonstrate that a protein called SlpA on C. difficile’s surface acts as the attachment site for engineered pyocins. That team also found that the rare genetic loss of SlpA that renders C. difficile resistant to the Avidocin-based drugs makes the bacteria unable to cause a life-threatening infection.

Other research teams are looking for new approaches to fight antibiotic resistance. Scientists led by McMaster University in Canada found an antibiotic that could reduce the ability of methicillin-resistant S. aureus to endure an immune attack. And an international team showed that a peptide called darobactin holds promise as a treatment for E. coli as it helps form the bugs’ external membrane that protects them from attacks.

Massachusetts Institute of Technology scientists recently discovered that by manipulating the structure of bacteriophages’ tail fibers, they can design tailor-made therapies against particular strains of E. coli, even those that had developed resistance against natural phages.

Shedding light on pyocins’ structure could allow Pylum to fine-tune the sensitivity and specificity of its precision antibiotics, the company argues.

“By focusing on narrow-spectrum agents that exquisitely kill only one type of bacteria, we believe we reduce the risk of widespread resistance that has rendered many broad-spectrum antibiotics useless, and at the same time spare the healthy microbiota,” Dean Scholl, Pylum’s vice president of research and co-author of the paper, said in a statement. “Our technology has demonstrated potent activity in a number of in vivo models. We are currently in the process of scaling up production with a goal of beginning clinical development.”