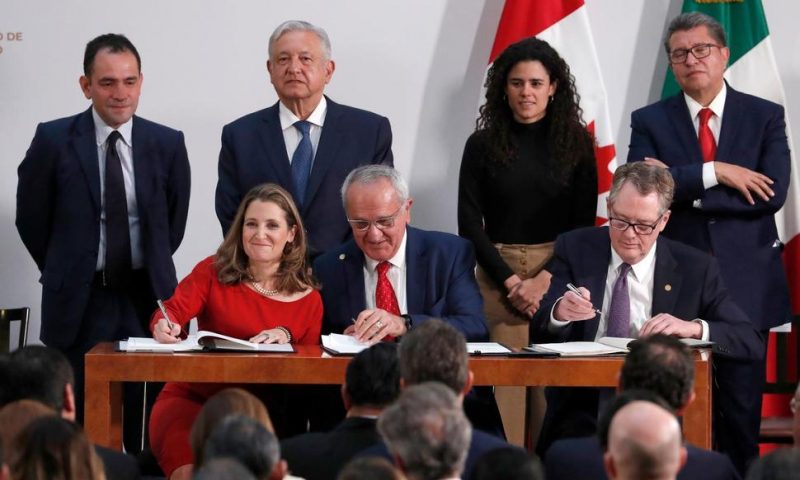 WASHINGTON — After months of political wrangling, House Democrats agreed Tuesday to President Donald Trump’s revamped version of a 25-year-old North American free trade agreement. But they pried some concessions out of the Trump administration before saying they’d go along.

Tuesday’s announcement by House Speaker Nancy Pelosi probably clears the way for congressional approval of Trump’s U.S.-Mexico-Canada Agreement, though pockets of resistance remain and powerful business lobbies said they still needed to study the details of the latest version.

With characteristic brio, the president took to Twitter to declare: “It will be the best and most important trade deal ever made by the USA.’’

More than anything, though, USMCA would just restore certainty to $1.4 billion worth of annual trade between the three countries more than two years after Trump began contentious negotiations on a new regional trade pact.

Some questions and answers about new agreement:

The pact is Trump’s replacement for the North American Free Trade Agreement, which took effect in 1994. NAFTA slashed tariffs and tore down most trade barriers between the United States, Canada and Mexico, unleashing a burst of trade between the three countries.

Supporters of the deal said it created a powerful regional bloc — a competitive counter to Europe and East Asia — with each NAFTA country taking advantage of its strengths: low-cost manufacturing in Mexico; and high-skilled labor and proximity to cutting-edge research and to customers in the United States and Canada.

Trump insisted on a revamped deal and threatened to withdraw from NAFTA if he couldn’t get one he liked. Negotiations on a replacement began in August 2017. The three countries signed USMCA a year ago. Now Congress must ratify the deal.

HOW DOES USMCA CHANGE TRADE BETWEEN THE THREE COUNTRIES?

Trump’s version mostly continues to allow the free flow of trade across North American borders of the three countries. But it updates the pact to reflect the rise of e-commerce and other aspects of the digital economy that didn’t exist when NAFTA was negotiated.

DOES USMCA DO ANYTHING TO PROTECT U.S. MANUFACTURING JOBS?

Yes. To qualify for USMCA’s duty-free benefits, carmakers must get 75% of their automotive content from within North America — up from 62.5% under NAFTA. That means more content would have to be homegrown in higher-wage North America, not imported more cheaply from China and elsewhere.

At least 40% of vehicles would also have to originate in places where workers earn at least $16 an hour. That would benefit the United States or Canada — not Mexico, where auto assembly workers are paid a fraction of that amount. The wage requirement is likely to push up the cost of cars built in North America.

Under USMCA, Mexico was required to formally authorize workers to form independent unions. Mexican unions had traditionally been co-opted by employers and the government and done little for workers. Laborers have been fired for trying to bargain on their own for better pay and working conditions. That is one reason Mexican wages remained so low — and attractive to U.S. manufacturers aiming to cut costs.

WHAT CHANGES DID DEMOCRATS GET?

Democrats complained that the deal with Trump’s team shared a defect with the treaty it was supposed to replace and improve upon: It would be hard to enforce. In negotiations with Trump’s top trade official, Robert Lighthizer, the Democrats successfully pushed to strike language allowing countries or companies to avoid sanctions simply by refusing to participate in dispute-settlement panels.

They also insisted on closing loopholes that would have made it hard to enforce provisions protecting workers from intimidation and violence and on a committee that will monitor Mexico’s labor reforms.

The Democrats also won a significant concession from the administration on drug prices. Gone is what Democrats considered a giveaway to the pharmaceutical industry: a provision that offered expensive biologic drugs — which are made from living cells — 10 years of protection from cheaper knockoff competition.

“If you go back and look at trade agreements over the last 20 years, most of the verbiage deals with protection for pharmaceuticals,” said Rep. Earl Blumenauer, the Democratic chairman of the House trade subcommittee. “They have been the big winners and they got shut out in this agreement.”

WHAT WILL USMCA MEAN TO THE U.S. ECONOMY?

Probably not much. Trade is a relatively small part of the U.S. economy and trade with Mexico and Canada is smaller still. In an April analysis, the independent International Trade Commission calculated that USMCA would add 0.35% or $68 billion, to economic growth and generate 176,000 jobs over six years — blips in a $22 trillion economy with 152 million nonfarm jobs.

“The intrinsic importance of the deal is not what it does to modernize NAFTA but rather what it prevents: a potentially disastrous breakdown of trade between the U.S. and its most important trading partners,’’ Daco wrote in a research note Tuesday.

IS EVERYBODY HAPPY WITH THE NEW AGREEMENT?

No. But USMCA still probably has enough support to clear Congress. In an unusual move, the top U.S. labor group — the AFL-CIO, which routinely opposes trade pacts — came out in favor of the worked-over USMCA.

But business groups want to take a closer look at the text. And some Republicans may balk at the concessions the administration made to win Democratic support.

Among other things, he objects to a so-called sunset provision that would end USMCA after 16 years unless the three countries agree to continue it and to the removal of the protection for biologic drugs.

Daniel Ujczo, a trade attorney with Dickinson Wright PLLC in Columbus, Ohio, said the concessions made to Democrats are likely to dampen the enthusiasm that businesses expressed while lobbying for the pact. “The business ‘wins’ that have been championed for the last year are now just a ‘whew’ we have relative certainty in North America,” Ujczo said.