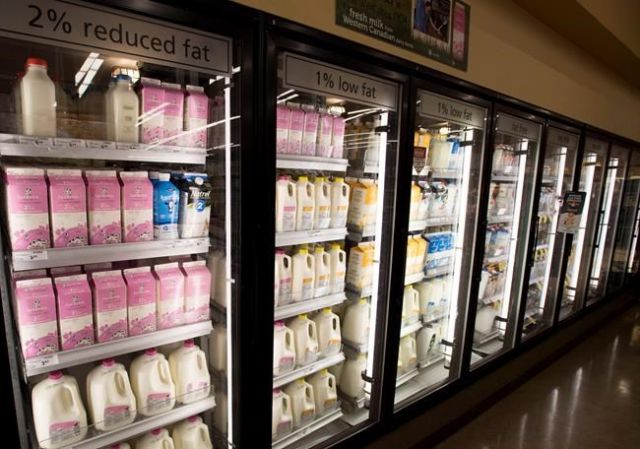 Canadian dairy farmers have panned the renegotiated trade pact between Canada, the U.S. and Mexico, saying the new deal will undercut the industry by limiting exports and opening up the market to more American products.

Dairy Farmers of Canada issued a terse statement almost immediately after the 11th-hour agreement was announced late Sunday, following 14 months of difficult negotiations between the parties.

The organization said the newly minted U.S.-Mexico-Canada Trade Agreement, or USMCA, will grant an expanded 3.6 per cent market access to the domestic dairy market and eliminate competitive dairy classes, which the group says will shrink the Canadian industry.

It said the measures will have “a dramatic impact not only for dairy farmers but for the whole sector.”

“This has happened, despite assurances that our government would not sign a bad deal for Canadians,” Pierre Lampron, president of Dairy Farmers Canada, said in the statement. “We fail to see how this deal can be good for the 220,000 Canadian families that depend on dairy for their livelihood.”

Prime Minister Justin Trudeau would only say it was a “good day for Canada” as he left a late-night cabinet meeting in Ottawa that capped several days of frenetic long-distance talks that included Foreign Affairs Minister Chrystia Freeland and U.S. Ambassador David MacNaughton.

U.S President Donald Trump took to Twitter early Monday to praise what he called an “historic” deal that came just before U.S. and Mexican trade authorities were set to publish their own trade agreement without Canada as a signatory.

“It is a great deal for all three countries, solves the many deficiencies and mistakes in NAFTA, greatly opens markets to our farmers and manufacturers, reduces trade barriers to the U.S. and will bring all three great nations closer together in competition with the rest of the world,” he tweeted. “The USMCA is a historic transaction!”

The deal appears to preserve the key dispute-resolution provisions — Chapter 19 — which allow for independent panels to resolve disputes involving companies and governments, as well as Chapter 20, the government-to-government dispute settlement mechanism.

A side letter published along with the main text of the agreement exempts a percentage of eligible auto exports from the tariffs. A similar agreement between Mexico and the U.S. preserves duty-free access to the U.S. market for vehicles that comply with the agreement’s rules of origin.

New chair to rein in Musk