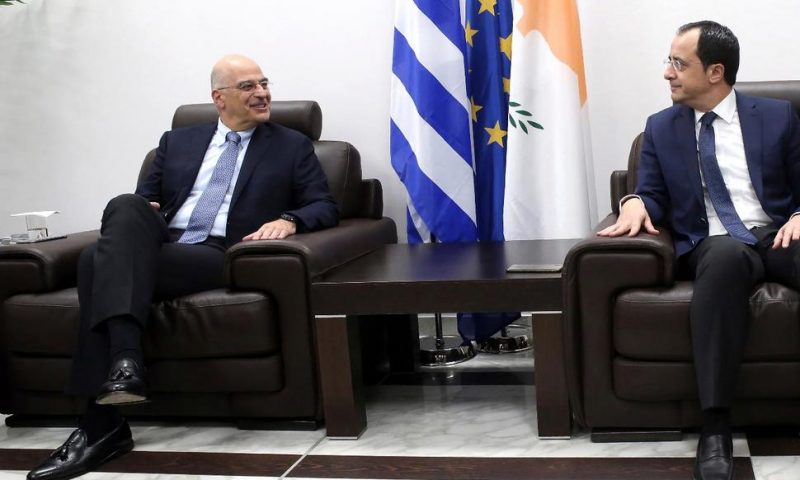 Cyprus, Greece and Israel will sign an agreement in the new year to build the eastern Mediterranean natural gas pipeline.

ATHENS, Greece — The leaders of Cyprus, Greece and Israel plan to sign an agreement early in the new year for the building of the eastern Mediterranean natural gas pipeline, the Greek prime minister’s office announced Sunday.

As now planned, the pipeline will run across the Mediterranean from Israel’s Levantine Basin offshore gas reserves to the Greek island of Crete and the Greek mainland, and then to Italy.

The deal will be finalized with Italy’s signature at a subsequent date, Mitsotakis’ office said. In May, Italian Prime Minister Giuseppe Conte had expressed opposition to the Poseidon project, which is the last section of the pipeline that would connect Greece with Italy.

Cyprus, Greece and Israel already signed an agreement on the 1,900-kilometer (1,180-mile) pipeline earlier this year in the presence of U.S. Secretary of State Mike Pompeo.

The EastMed pipeline is expected to satisfy about 10% of the European Union’s natural gas needs, decreasing energy dependence on Russia.

The EU has contributed to the cost of technical studies for the project.

The three signatory countries are joined in a common opposition to Turkey’s recent deal with the U.N.-recognized Libyan government delineating “maritime borders” between the two countries in the Mediterranean. Turkey and Libya are geographically far from each other, with Greece and Egypt being in the way.

The deal is seen as Turkey’s way to pressure for a share in the maritime resources of the eastern Mediterranean, even if this means encroaching into other countries’ space. Turkey, for its part, contends that Greece and Cyprus aim to confine Turkey it its narrow territorial waters.

On a visit Sunday to Cyprus, Greek Foreign Minister Nikos Dendias was asked if the EastMed deal signing was an answer to Turkey’s deal with Libya.

“What we’re doing is not in reaction to anything,” he said. “It’s an effort to improve the quality of life of our countries’ citizens, to improve our economies and to offer solutions, and EastMed is a great energy boost to the European Union’s energy options.

“We don’t see our initiatives as being directed against anyone,” he added. “We see them as positive steps, and we invite whomever to take part as long as they agree with the wider framework.”

Cypriot Foreign Minister Nikos Christodoulides, however, said there is a need to counter Turkey’s recent actions.

“We have common goals and approaches and I believe that the proper framework is being created to counter the actions of some who wish to create conditions of instability in the eastern Mediterranean by violating international law,” he said.

“All countries which perceive international law as the natural state of things are welcome to take part in our common initiatives,” Denjdias added.

The Greek foreign minister also visited eastern Libya and Egypt on Sunday. In Benghazi, Libya, he conferred with Field Marshal Khalifa Haftar, leader of the Libyan National Army, which is fighting the Tripoli-based Libyan government recognized by the United Nations.

In Cairo, Dendias met with his Egyptian counterpart, Sameh Shoukry. Egypt has also denounced the Turkish deal with Libya.