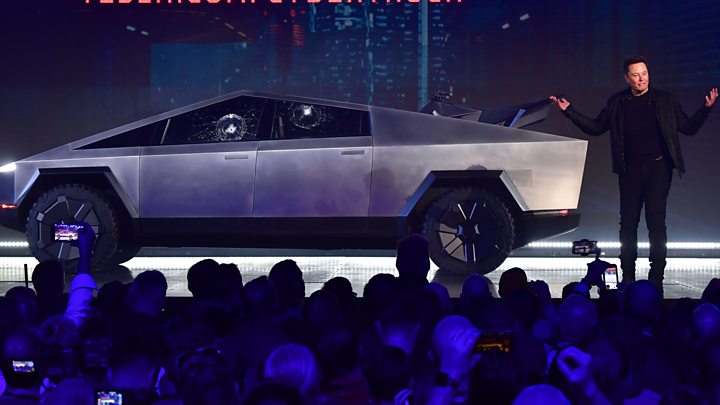 Tesla has received almost 150,000 orders for its new pickup truck, boss Elon Musk has said, despite an embarrassing hiccup at its launch.

Mr Musk was caught out on stage when the windows of the Cybertruck shattered during a demonstration supposed to show their durability.

Tesla shares dived 6.1% after the event on Thursday and several bad reviews.

With its distinct angular design, the electric truck was greeted with cheers but also bemusement.

The demand had come despite “no advertising & no paid endorsement” for the truck, he said.

No date has been given for the Cybertruck’s release, but analysts said it would not be ready before the end of 2021 at the earliest.

The industrial-looking vehicle is covered in stainless steel alloy and will be able to go from 0 to 100km/h (62 mph) in about three seconds, Mr Musk said in his presentation in Hawthorne, California.

However, some analysts are concerned about the futuristic design, with Jessica Caldwell of Edmunds’ vehicle marketplace saying: “It looks like a truck version of the DeLorean from Back To The Future.”

The launch event’s “fail” happened during a segment displaying how the truck’s stainless steel exterior, and metal windows, could withstand bullets and sledgehammers.

Tesla’s head of design, Franz von Holzhausen, proceeded to throw a metal ball at the front left window, causing it to smash.

He repeated the move on the rear left window and the same thing happened. Mr Musk was heard to swear before joking: “Room for improvement.”

On Friday Tesla’s share price dived by 6%, slashing Mr Musk’s personal net worth by $768m (£598m) in a single day, according to Forbes.

The pickup market represents a significant opportunity for Tesla as it improves its battery technology, meaning carrying heavier loads over long distances is now practical.

According to vehicle marketplace Edmunds, large trucks have accounted for 14.4% of new vehicle sales in the US up until October, compared to 12.6% in 2015.

Web Inventor Has an Ambitious Plan to Take Back the Net