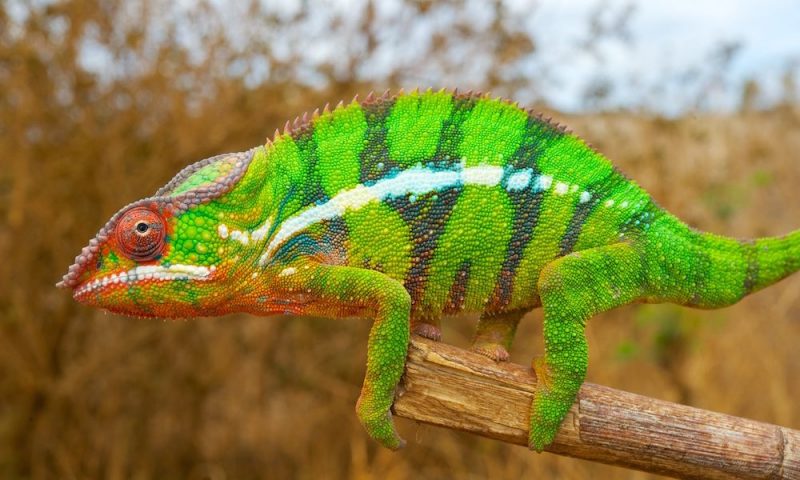 Transport proteins can switch between microtubule network and actin network

Many amphibians and fish are able to change their color in order to better adapt to their environment. Munich-based scientists have now investigated the molecular mechanisms in the cytoskeleton necessary for this and revealed potential evolutionary paths.

All cells of higher organisms are permeated by a cytoskeleton that essentially consists of actin filaments and small protein tubes called microtubules. For a long time science considered the actin or microtubule networks as independent systems.

Today it is known that the two network types communicate with each other and thereby make vital cellular processes such as cell division or cell migration possible in the first place. However, it was still unknown how this collaboration works at the molecular level.

Dr. Zeynep Ökten from the Chair of Molecular Biophysics at the Technical University of Munich (TUM) and Erwin Frey, Professor of Statistical and Biological Physics at the Ludwig-Maximilians-Universität München — with their teams — have now for the first time identified a molecular mechanism by the example of change of color among animals which explains the communication between both network systems, and revealed potential evolutionary paths.

Transport pathways in the cell

Many functional components of a cell, such as the organelles, must be brought to the right place at the right time in the cell. For this purpose they are actively transported by molecular motors on the microtubules and actin filaments.

Studies have shown that motors which were long regarded as highly specific for one of the two network systems can in reality also be redirected to the other filament type. In mice, for example, scientists found an adapter protein that regulates this redirection.

Myosin transports its freight via the actin network, but the adapter protein also interacts with the microtubules and can redirect the transport on this network. Which network is preferred is controlled by a chemical modification to a specific binding site of the adapter protein.

Fish and amphibians also have a protein corresponding to the mammalian adapter. The evolutionarily older fish and amphibians use it to adapt their skin color to environmental factors by redirecting pigment organelles within specialized cells.

That is why the research team used zebrafish and clawed frogs for experimental investigations in Ökten’s laboratory to examine the origin and the molecular mechanisms of interaction between the microtubule network and the actin network.

Evolution of a molecular switch

The scientists found out that the mouse adapter protein as well as the clawed frog adapter protein has a specific domain which enables the switching between the transport of actin and microtubules.

Zebrafish, the evolutionarily oldest of examined animals, do not yet have this domain. “Here the motor proteins which move the pigments organelles are subject to different regulatory mechanisms, and there is no interaction between the different cytoskeleton networks,” says Ökten.

“In contrast, switching between the networks is absolutely necessary among the clawed frogs so that the animal can change color — and this ability to switch has also been preserved in the further course of evolution from amphibian to higher vertebrates,” explains Ökten further.

Moreover, the experimental results showed that the environmental signals which bring about the redistribution of pigment organelles in the organism of clawed frogs are associated with a change of probability with which the individual motor proteins from the actin filaments switch to the microtubule filaments.

“It is notable that our simulations remarkably precisely reflect the redistribution of organelles observed in the living organism,” says Frey. “As a result, the theoretical approach underscores the functional importance of experimental results, and shows that the interaction between actin network and microtubule network, which has developed among lower vertebrates, exhibits a particularly high regulatory efficiency.”

How Social Experiences Can Determine How Old You Look