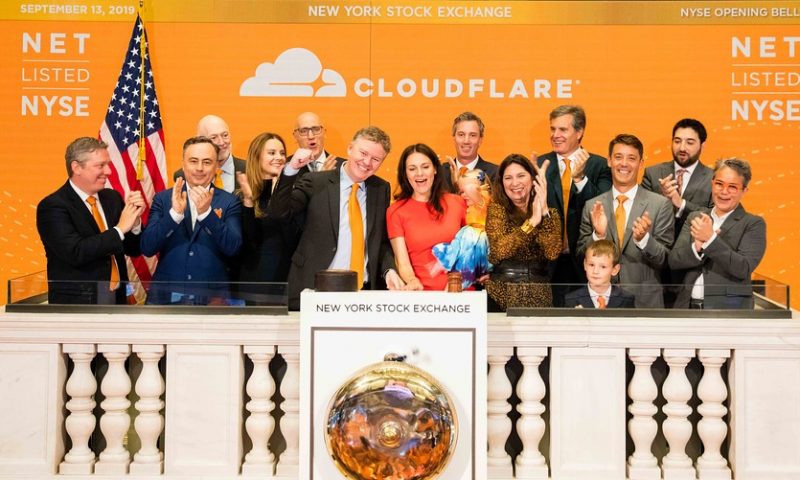 Cloudflare Inc. shares burst out of the gate for their first day of trading Friday as the latest cybersecurity company to go public in a space that’s seeing rapid consolidation.

Shares of the company, which specializes in a cloud-based network platform that promises security, enhanced performance of business-critical applications, and “eliminating the cost and complexity of managing individual network hardware,” traded publicly for their first day Friday under the ticker symbol “NET” on the New York Stock Exchange.

The IPO received a warm reception even as the company appeared to have a bumpy ride leading up to it.

In August, Cloudflare dropped 8chan as a customer, condemning the unmoderated message board as “a receptive audience for domestic terrorists” following recent mass shootings, and this appears in the company’s “risk factors” section. Cloudflare noted that it was not the first time a customer elicited scrutiny after a violent attack.

The company also disclosed that it may have done business with individuals and entities tied with narcotics and terrorism according to the U.S. Department of the Treasury’s Office of Foreign Assets Control blacklists, and that it was introducing additional controls and screening to prevent similar activity occurring in the future.

“The challenge that we had is that we were getting mixed signals from the U.S. government for the last nine years,” Matthew Prince, Cloudflare co-founder & CEO, told MarketWatch in an interview.

“Some parts of the U.S. government were like ‘we’d really like it if these bad guys were on your network because you guys respond to valid court orders, and we’d rather them be on your network than on your Iranian competitor,’” he said. “Others are like, ‘the law is the law.’”

At the end of 2018 as the company started getting ready for the IPO, Cloudflare decided to err on the side of the letter of the law.

“We said ‘enough is enough, you guys haven’t been able to give us one clear message,’ because different parts of the U.S. government had different opinions,” Prince told MarketWatch.

Cloudflare’s IPO comes just a few months after cybersecurity company CrowdStrike Holdings Inc. CRWD, -6.89% went public in June. While CrowdStrike shares are trading 91% above their IPO price, the ETFMG Prime Cyber Security HACK, +0.16% is up 14% for the year and the Renaissance IPO ETF IPO, -0.69% is up 31%. The First Trust Cloud Computing ETF SKYY, -1.24% is up 19% for the year, compared with a 23% gain in the tech-heavy Nasdaq Composite Index COMP, -0.22%.

Cybersecurity has become a hot space recently as a buy or be bought mentality has crept into the year as VMware Inc. VMW, -1.90% announced an acquisition of cybersecurity company Carbon Black Inc. CBLK, +0.04% Broadcom Inc. AVGO, -3.41% made a bid for Symantec Corp.’s SYMC, -0.33% enterprise business, and BlackBerry Ltd.’s BB, +0.81% acquisition of Cylance in February.

Prince said an IPO has always been an implicit assumption at the company. As soon as you start taking venture capital money or start issuing options to employees, there’s an implicit signal that you’re going to have to turn that into something you can buy a house with or send a kid to college with, and that there was no pressure from early investors or employees, he said.

“When you get to the point where you’re generating hundreds of millions of dollars in revenue and you’ve got over a thousand employees, the rules of being a public company, whether you’re public or not, you should be living by,” Prince told MarketWatch. “You should do audits and you should have an internal control system and you should make sure you’re doing GAAP financials , and all of those things and you can’t be Peter Pan forever.”