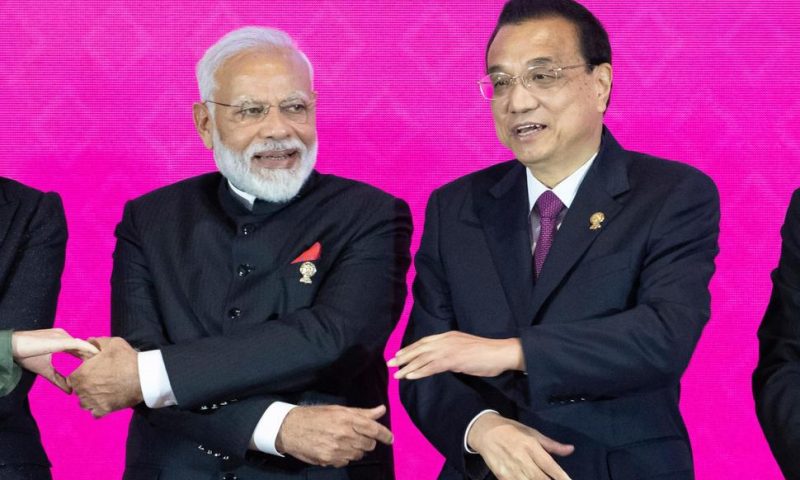 A 16-nation trade initiative backed by China is pushing ahead as India drops out.

NONTHABURI, THAILAND — A 16-nation trade initiative backed by China is pushing ahead as India, facing fierce domestic opposition to its market-opening requirements, has dropped out.

Leaders of countries involved in the Regional Comprehensive Economic Partnership said Monday that they had resolved differences, but India said it was out. Seven years after talks began, the signing of a final deal was pushed back to next year.

India has balked at exposing its farmers and factories to more foreign competition, especially from China. It decided not to join the initiative because of an “inadequate protection against import surge,” among a list of reasons the foreign ministry circulated after leaders met.

She said the agreement was not “fair and balanced,” and that Prime Minister Narendra Modi worried that it would pinch India’s most vulnerable people.

The other RCEP members include the 10 nations belonging to the Association of Southeast Asian Nations, China, Japan, South Korea, Australia and New Zealand.

It does not include the United States, despite America’s $1.9 trillion in trade with the region.

For years, world manufacturers have been boosting investment in and trade with Southeast Asia, a fast-growing and increasingly affluent market of 650 million people.

That trend has accelerated amid feuding between the U.S. and China over trade and technology, which has ramped up uncertainty as the two largest economies imposed billions of dollars’ worth of punitive tariffs on each other’s exports.

RCEP originally would have included about 3.6 billion people and encompassed about a third of world trade and global GDP.

“RCEP will significantly boost the region’s future growth prospects and contribute positively to the global economy,” said a statement issued after leaders met.

Many countries in Asia have forged free trade agreements in and outside the region, including a rival Pacific Rim trade initiative originally championed by the U.S., the Trans-Pacific Partnership. Eleven countries remain in that pact after President Donald Trump pulled out shortly after taking office. It does not include China.

India has lagged many countries in the region in opening its markets, and groups associated with the ruling nationalist Bharatiya Janata Party have staged scores of protests against participating in RCEP.

Among other concerns, Indian dairy farmers are worried about competition from New Zealand and Australian milk and cheese producers. Automakers fear imports from across the region. But overall the biggest fear is over a flood of manufactured goods from China.