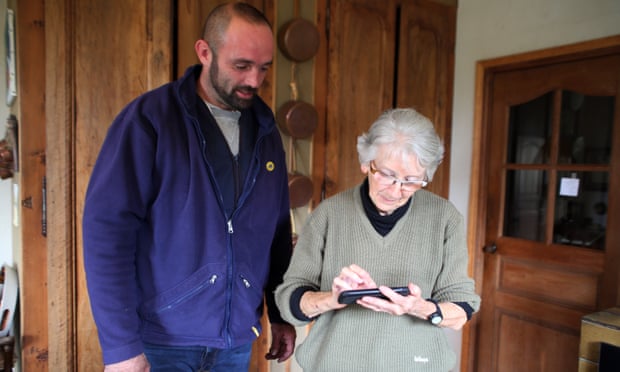 Nicolas Dezeure drove his yellow post van up the winding single-track road, past fields and olive groves, to an isolated stone house at the top of a hill. Outside the front door, an elderly woman raking fallen leaves welcomed him like a long-lost friend.

“It’s lovely to see the postman as I don’t usually see anyone else all week,” said Janine, 81, as Dezeure handed her a tax bill and an envelope addressed to her husband who died several years ago. She ushered him into her kitchen for a chat.

A rural postman politely checking on a lonely elderly person might seem a natural part of French countryside life. But Dezeure’s carefully planned visits to Janine each Monday morning are part of a new strategy for the French post office as it tries to find a joint solution to two very different challenges; the growing number of elderly people living alone; and a decline in letter-writing in the digital era, which means France is looking for new ways to make a profit from its 73,000 postal workers. In 1990, delivering letters accounted for 70% of the state post service’s turnover; in 2020 it will be less than 20%.

The service, Watch over my parents (Veiller sur mes parents), was launched last year. Customers – often in their 50s and living in major cities – pay from €20 (£18) a month for postal workers to visit their parents living alone far away. Visits can be weekly or more regular, with a report delivered to the family and an option of a 24-hour helpline and alert system.

About 6,000 elderly people are currently availing of the service – the average age is 82, the oldest is 98.

In Janine’s kitchen, with her neat display of copper pots and china teapots, Dezeure, 37, who has been a postal worker for 16 years, carried an official list of questions for small talk, including: “What did you watch on TV last night?” But he has got to know Janine quite well in their 15-minute chats each Monday, so he improvises. “In any case I don’t watch TV,” she said. “But I did watch Out of Africa on DVD last night.”

Dezeure said: “She knows loads about me. We talk about my days playing rugby, my aching shoulders, knees … ” After the chat, he sent a message straight to Janine’s two daughters, in their 50s, who live more than 370 miles (600km) away in the Paris area, telling them she was OK.

“I agreed to do this for my daughters,” Janine said. “They worry that I’m on my own in the middle of nowhere.” Her package includes a 24-hour helpline and an alert system if she has a problem. “I used to boast I never went to the doctor, but then I had a fall recently. I feel more secure this way.”

She has lived for 40 years in the same house, built by her husband, and never wants to move away from the secluded spot. “The radio is a marvellous companion,” she said. “My motto is: ‘Turn the radio on, fill the house with sound.’”

Dezeure sees the human link with customers as one of the best parts of his job. He grew up in this corner of the Vaucluse in southern France and his own grandparents, in their 80s, live on his delivery route. “The postman is a key figure. People come up to you in the street. We’re always there at the same time of day. People virtually set their watch by us, saying: ‘Ah that’s the postman, it must be time for lunch.’”

Eric Baudrillard, in charge of developing new strategy at the French postal service, said: “No other postal service in the world has done what we’re doing for elderly people. We’re pioneers on this. People are living longer, and more of them want to stay in their own homes as long as they can. We know there will be more need for social links like this as mobility grows and adult children move far from their ageing parents. Despite all the digital tools that we have, there is still a need for human connection.”

He denied that the French post office was cashing in on friendly gestures that postal workers had been doing for years for free. “Postal workers always spontaneously and informally connected with clients and looked out for them, and that will continue. But what we’re doing is adding new services and bringing greater value.”

Other schemes have already been rolled out – postal workers in France can deliver elderly customers supplies from shops, basic prescriptions, books from libraries and hot meals – though they are paid for by local councils. This week La Poste began offering a service delivering elderly people a regular printout of photos and messages from relatives, which it described as “a kind of Facebook on paper”.

Pascal Frémont, from the Sud trade union, who was a postal worker in Loire-Atlantique for 15 years, said he had reservations about the post office capitalising on the silver economy. “For us, it’s not a problem for postal workers to keep an eye on older people, because many of us already did that. But if it is a paid-for service, that excludes some people who can’t afford it, and affects the notion of public service. We would prefer partnerships, such as with the health ministry. And we’d prefer for any support of the elderly to be funded by the price of stamps. Also, postal workers aren’t healthcare staff, so we should be cautious about that.”

Yves Lecouturier, a former postal worker who ran a postal museum in Caen, Normandy, said: “The social link between postmen and postwomen and the population always existed in France. In the late 1970s, we delivered Monday to Saturday and I remember some older people in remote rural locations subscribed to a daily newspaper just so the postman would come round to deliver it – that would be the only person they saw.”

As Dezeure left to continue his morning’s round, Janine said: “I want to stay living at home and I appreciate my adult children want to know I’m OK. It’s pleasant to see the postman for a regular chat, and what choice do I have? It’s this or leave my home.”