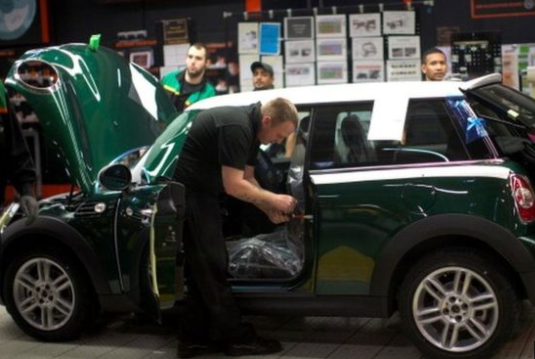 New investment in the UK car industry has suffered a ‘precipitous’ decline.

It comes at a time when businesses in the sector have been spending heavily on preparations for a no-deal Brexit, according to the Society for Motor Manufacturers and Traders (SMMT).

The government says it is liaising with companies to help them prepare.

The SMMT says investment fell to just £90m in the first six months of the year from £347m last year.

By contrast, firms’ spending on contingency plans for a possible no-deal Brexit has now reached a minimum of £330m.

Meanwhile, production in the first half of the year fell by a fifth. During that time, 666,521 new cars rolled off production lines, compared to 834,573 during the same period in 2018.

Although that figure was affected by some manufacturers bringing forward their annual summer shutdowns, the SMMT says output has now been falling for 13 consecutive months, and the underlying trend remains sharply downward.

SMMT chief executive Mike Hawes told the BBC the fall in investment was the most disturbing trend, and he links it directly to fears about the UK potentially leaving the EU without a deal that would protect cross-border trade.

“Over the last seven years the UK automotive industry was a real success story. We were averaging something like £2.5bn per annum”, he says.

“The fear of no-deal is causing investors to hold back and wait and see what’s going to happen”, he says.

Not all investors are holding back however. In early July, for example, Jaguar Land Rover announced plans to build the first of a new range of electric and hybrid models at its factory in Castle Bromwich.

The project, which will help to keep thousands of jobs, is likely to cost close to £1bn. It was announced too late to be included in the six-monthly figures.

But while Mr Hawes enthusiastically welcomes JLR’s plan, he insists the company is an “outlier”, and that the broader picture is very different, where investment is effectively stalled.

The SMMT has also warned that companies in the UK have had to spend large amounts of money or tie up working capital preparing contingency plans for a no deal Brexit, at a time when the industry as a whole is investing heavily in developing electric and autonomous vehicles.

Exports down
Such spending, it says, has included stockpiling materials and components, securing warehousing capacity and investing in new logistics systems.

Several major manufacturers brought forward their annual production shutdowns, to mitigate disruption around the original 31 March Brexit date – a measure which it says cannot be repeated in October.

Not all the sector’s woes can be blamed on Brexit, however. Eight out of every 10 cars built here are exported, and sales in a number of major markets have declined sharply in recent months.

As a result, shipments to China fell 53.1% in the first half of the year, while those to the US fell nearly 13%. More than half of the UK’s exports go to the European Union – and demand there fell by 15.6%.

“Existential threat”
Meanwhile outside factors have also been blamed for Honda’s recent announcement that it will close its plant in Swindon in 2021, Nissan’s decision to build its new X-trail in Japan rather than in the UK and Ford’s plan to shut its factory in Bridgend.

But the SMMT is worried that Brexit fears are preventing new investment from coming in to replace the jobs and work being lost.

Last week, Mr Hawes wrote to the new Prime Minister, Boris Johnson, urging him to reach a deal with the EU that allows parts and finished cars to cross borders freely, without being subject to tariffs or onerous customs controls.

A no-deal Brexit, he warned, would be an “existential threat” to the industry, and simply should not be an option.

A spokesperson for the Department for Business, Energy and Industrial Strategy said: “The UK automotive industry remains one of our great success stories.

“We are at the forefront of designing and manufacturing cutting-edge vehicles, and we continue to talk to industry, including the automotive sector, in the run-up to exit day to ensure they are prepared and can maximise the opportunities of our exit from the EU.”