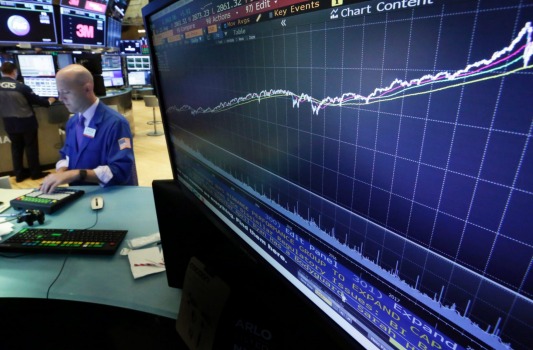 US equity bulls are betting heavily on the pending quarterly earnings season to bolster their level of conviction and their positions.

For months bears have been waving flags – pointing to the eventual fading impact of the Republican tax cuts and the surge in US government spending as well as the continual rise in US interest rates – and yet investors mostly retain their fear of missing out.

To wit, the Standard & Poor’s 500 Index surged 7.2 per cent in the September quarter. It’s now 9.9 per cent higher so far this year and it closed on Friday in New York less than 17 points from the record high it set on September 20.

Not to be outdone, the Dow Jones Industrial Average – and its far more industrial-focused 30 components – increased 9.0 per cent in the latest quarter, lifting its year to date gain to 7 per cent as it set a record high on September 21. It’s about 1 per cent from its record.

LPL Financial market strategist Ryan Detrick noted that “the past three months have been among the least volatile in history” and it also was the best quarter for the S&P 500 in five years.

Mr Detrick remains bullish on the outlook, too.

But some headwinds are starting to appear: the pace of expansion in the manufacturing sector is easing as is chief executive confidence in part because there’s no apparent near-term end to the trade battle between the US and China.

There’s also the Federal Reserve, which has ended its “accommodative” era. More interest rate rises lie ahead this year and next because Fed chair Jerome Powell sees strength in the US economy: “There’s no reason to think that the probability of a recession in the next year or two is at all elevated,” Mr Powell said last week.

Not everyone is as assured.

“Bottom line for equity markets is we are seeing a lot of performance chasing,” Tematica Research’s Lenore Hawkins said. “According to the latest Bank of America Merrill Lynch portfolio manager survey, the pros continue to love domestic equities and dislike emerging markets with $US14.5 billion net inflows into the US and $US962 net outflows from EM [emerging markets]” during the second last week of September.

BAML’s latest global fund manager survey found that the allocation to US equities climbed 2 percentage points to net 21 per cent overweight in September, the biggest overweight since January 2015, with the US the most favoured equity region globally for the second month running.

Still, Ms Hawkins expressed scepticism of the Dow’s performance in particular. “The strength in the Dow is contradicted by six-month lows in small caps and weakness in financials.”

The contrasting interpretations of US equities reflect that S&P 500 companies are expected to report earnings per share in the latest quarter rose 21.6 per cent from a year ago, according to Thomson Reuters. Hardly a sign of sudden weakness.

The Atlanta Fed’s measure of the pace of economic growth for the third quarter stood at 3.6 per cent after personal income and outlays were released from the US Bureau of Economic Analysis over the weekend. Again, hardly a sign of weakness.

Ms Hawkins though said she’s expecting corporate executives to become “more conservative” with their guidance in conference calls in the weeks ahead, which could lead investors to rethink their expectations for the fourth quarter.

“We’ve started to see some downward revisions in projections for the September and December quarters, which have softened 2018 EPS [earnings per share] estimates to $US162.01 from $US162.60 several weeks ago,” Ms Hawkins said.

“Not a huge drop, but when looking at the current stock market valuation of 18x expected 2018 EPS, remember that hinges on the S&P 500 group of companies growing their EPS more than 21 per cent year over year in the second half of 2018.”

Ms Hawkins pointed to the rough stock market reception given to outlooks by Nike, Jabil and KBHome – each of which recently reported strong quarterly results. “What this tells me is we could be in for a bumpy ride over the ensuing weeks as trade, tariffs, politics and economic data converge on corporate guidance and hit investor expectations.”

Bears are betting that the likelihood of a correction is rising; bulls are holding fast for the moment.

What will it take to snare bulls? For Ed Yardeni, it’s simple: “It will take a recession. That’s all there is to it.”