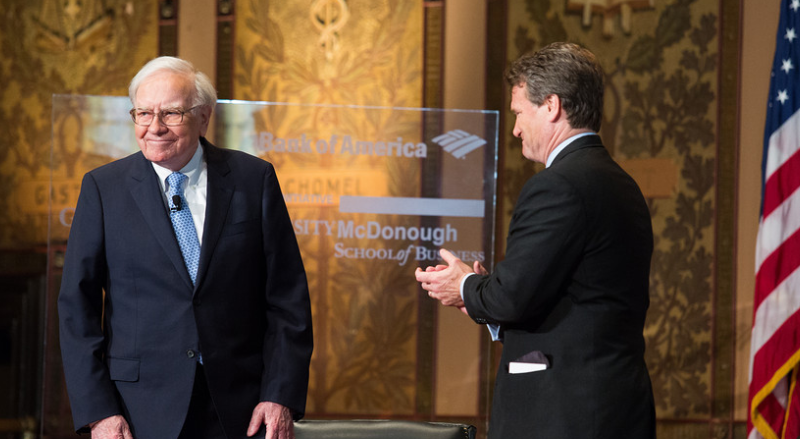 Bank of America Corp. is by far Warren Buffett’s favorite bank, as his Berkshire Hathaway Inc. has boosted its stake in the moneycenter bank to more than $29 billion.

In a Form 3 filing with the Securities and Exchange Commission late Thursday, Berkshire Hathaway disclosed that it owned 950.0 million shares of Bank of America, or more than 10% of the common shares outstanding. Buffett is Berkshire’s chairman and chief executive officer.

That’s up from a previous disclosure of a 896.2 million-share stake, or about 9.4% of the shares outstanding, as of March 31.

“The beneficial ownership of the shares of common stock reported herein exceeds 10% as a result of the issuer’s repurchases of its own securities, based on the issuer’s most recently announced number of shares of common stock outstanding,” Berkshire stated in a Form 3 filing with the Securities and Exchange Commission. BofA’s most recent 10-Q filing said there were 9.51 billion shares outstanding as of April 25, but the bank said it bought back $6.5 billion worth of stock during the second quarter.

One way Buffett built his stake in BofA was by exercising warrants that were acquired as part of a deal announced in August 2011, in which he invested $5 billion in preferred stock that paid a 6% annual dividend at a time the bank was struggling to return to health in the aftermath of the 2008-2009 financial crisis. That dividend yield was nearly triple the yield on the 10-year Treasury note TMUBMUSD10Y, -0.48% at the time.

Also providing a boost to BofA shares, Keefe, Bruyette & Woods analyst Brian Kleinhanzl upgraded the bank to outperform from market perform, and raised his stock price target to $36 from $32, saying he expects the bank to benefit from an improved economic outlook after expected interest rate target cuts by the Federal Reserve.

BofA’s stock has gained 1.6% in the past three months, while the SPDR Financial Select Sector exchange-traded fund XLF, +1.09% has advanced 3.5% and the Dow Jones Industrial Average DJIA, +0.19% has tacked on 2.4%.

The following table shows Berkshire’s common-share holdings of banks other than Bank of America as of March 31, according to Berkshire’s latest 13F filing in May. The next 13F is due in mid-August.