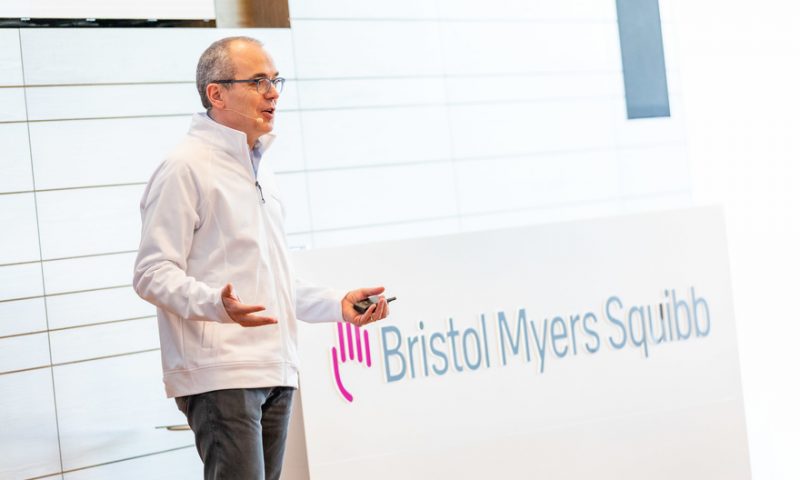 We already knew from data, FDA filings and approvals that Bristol Myers Squibb’s $74 billion bet on Celgene was beginning to pay off. Now, the Big Pharma is telling us by just how much.

In the first of a series of online meetings that started on Monday, the company upped its forecast of annual sales from its late-stage pipeline from $15 billion to $20 billion, starting in the second half of the decade. Of the eight near-term launches expected to rake that sum in, six products were picked up from Celgene.

Two of those—JAK inhibitor Inrebic and anemia med Reblozyl—scored the FDA nod before the megamerger closed. The agency cleared Zeposia for relapsing multiple sclerosis in March this year, but BMS decided to delay its rollout thanks to the COVID-19 pandemic.

As for the other three, CAR-T therapy lisocabtagene maraleucel, or liso-cel, is under FDA review for relapsed or refractory B-cell lymphoma with a decision expected by Nov. 16. Earlier this year, it had snagged a speedy review with an August decision date, but the FDA added three months to the timeline with a request for additional information.

The agency is expected to decide the fate of CC-486, a firstline maintenance therapy for acute myeloid leukemia, by Sept. 3. Finally, BMS plans to file idecabtagene vicleucel, or ide-cel, its bluebird-partnered CAR-T, for approval by the end of July. The Monday presentation focused on oncology, but the company will hold more meetings to cover its hematology and fibrosis pipelines.

Beyond these approved and late-stage programs, the drugmaker highlighted other oncology assets, notably relatlimab, a LAG-3 inhibitor that could boost the effects of its PD-1 med Opdivo, and bempegaldesleukin, or bempeg, a pegylated IL-2 that could do the same.

LAG-3 expression is linked to T-cell exhaustion, which help tumors resist PD-1 blockade. BMS is testing relatlimab in a phase 2/3 study in metastatic melanoma to see if adding it to Opdivo could help patients whose T cells are too tired to fight cancer.

As for Nektar-partnered bempeg, the IL-2 med is in registrational studies in multiple cancers, including melanoma, kidney cancer and bladder cancer, to see if it can boost Opdivo.

BMS counts 19 cancer assets in its early-stage pipeline, along with 15 in hematology, nine in immunology, and five each in cardiovascular disease and fibrosis. It’s particularly excited about a BCMA T-cell engager, which read out its first clinical results last year, and eventually, working on next-generation CAR-T therapies. That includes developing allogeneic, or off-the-shelf, CAR-Ts, treatments that target two antigens instead of just one, and CAR-Ts that carry armed payloads so they’re better equipped to overcome resistance in the tumor microenvironment.

Australian airline Qantas to cut at least 6,000 jobs amid pandemic

Kymab holds off Regeneron in patent fight on home turf