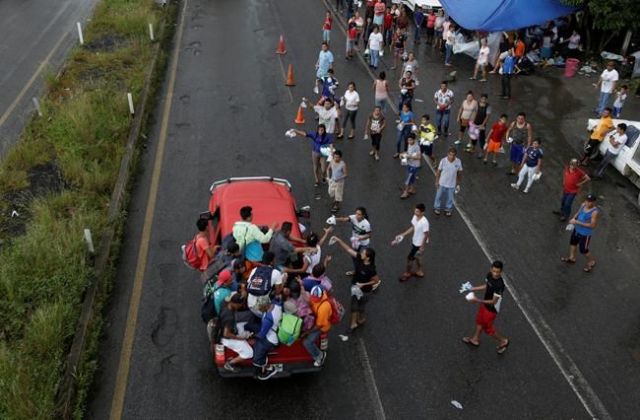 The Trump administration has not settled on a plan for what to do if a migrant caravan arrives at the southern border, despite threats by President Donald Trump to declare a national emergency or rescind aid from the countries whose people are journeying north.

Top immigration officials and close Trump advisers are still evaluating the options in closed-door meetings that have gotten increasingly heated in the past week, including one that turned into a shouting match as the caravan of about 7,000 people pushes north, according to administration officials and others with knowledge of the issue. They spoke to The Associated Press on condition of anonymity because they weren’t authorized to speak publicly on the topic.

The caravan, at least 1,000 miles (1,600 kilometres) away, comes on the heels of a surge in apprehensions of families at the border, which has rankled Trump but has also given him a fresh talking point to rally his base ahead of the midterm elections just two weeks away.

But the president’s inner circle on immigration is grappling with the same problems that have plagued them for months, absent any law change by Congress.

Some in Trump’s administration, like Homeland Security Secretary Kirstjen Nielsen, advocate for a diplomatic approach using relationships with Honduras, Mexico and El Salvador and the United Nations to stop the flow of migrants arriving to the U.S.

“We fully support the efforts of Guatemala, Honduras and Mexico as they seek to address this critical situation and ensure a safer and more secure region,” Nielsen said in statement earlier this week that noted her department was closely monitoring the possibility of gangs or other criminals that prey on those in “irregular migration.”

But others are agitating for more immediate options, including declaring a state of emergency, which would give the administration broader authority over how to manage people at the border; rescinding aid; or giving parents who arrive to the U.S. a choice between being detained months or years with their children while pursuing asylum, or releasing their children to a government shelter while a relative or guardian seeks custody.

Tensions boiled over last week, when Nielsen suggested going to the United Nations Committee on Human Rights in a meeting with White House chief of staff John Kelly. National security adviser John Bolton, a longtime critic of the U.N., exploded over the idea, the officials and people said. Nielsen responded that Bolton, not a frequent attendant of the immigration meetings, was no expert on the topic, they said.

White House spokeswoman Sarah Huckabee Sanders later said in a statement: “While we are passionate about solving the issue of illegal immigration, we are not angry at one another. However, we are furious at the failure of Congressional Democrats to help us address this growing crisis.”

Meanwhile, administration officials sounded off Tuesday on an increase in families coming across the border, mostly from Central America. Nearly a third of all people apprehended at the U.S.-Mexico border during the budget year 2018 were families and children — about 157,248 out of 395,579 total apprehensions.

Coupled with the caravan, Trump administration officials have said it’s a full-on crisis. They say loopholes in laws have allowed for a worsening border crisis where the vast majority of people coming illegally to the U.S. cannot be easily returned home.

But the administration’s efforts to enforce a hard-line stance on immigration through regulation changes and executive orders have been largely thwarted by the court system and, in the case of family separations earlier this year, stymied by a global outcry that prompted Trump to scrap separations in June.