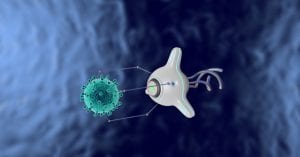 Biobots – Biological robots, attract inspiration from natural systems to imitate the activities of organisms, such as jumping or swimming. Interesting biorobotic engineering applications to better duplicate complicated motor behaviors to help fix real-world challenges can be achieved by advancements in biobots. This needs the development of biohybrid robots – biobots made up of both organic and artificial products – which is the main difficulty. This study showed that rat spinal cords control neural function in biobots

Scientists at the University of Illinois at Urbana-Champaign combined a tissue-engineered 3D muscular tissue system with an intact rat spinal cord. The research article is published in the journal APL Bioengineering.

Collin Kaufman, author of the study, a neuroscience graduate student, UIUC said, “When we looked more deeply at how the neuron-muscle interface developed, we were extremely delighted to observe numerous similarities between vivo growth and in our tissue-engineered spinobot”.

He added, “This result shows that even when the explanted spinal cord is removed from its natural environment, it is a viable mechanism for regulating muscular behaviors.

One prospective example is Lou Gehrig’s disease referred to as Amyotrophic Lateral Sclerosis (ALS), in which there is the eventual loss of motor function due to the death of nerve cells. ALS can be studied with ease of accessibility to the impacted parts in real-time by developing an external PNS.

Kaufman said, “The following steps to study such diseases are remarkably close”. “Scientists would certainly be able to study how diseased nerve cells communicate with nearby muscular tissues by replacing the spinal cord, muscle, or any type of combination of both cells with an ALS mutant model“.

Additionally, hybrid biobots can be made use of as medical training tools, permitting medical students to carry out surgery practice real biological tissue.

Martha Gillette, professor of cell and developmental biology, UIUC said, “The future applications of this technology are only starting to be understood, and in the following few years we anticipate many great things from this area”.