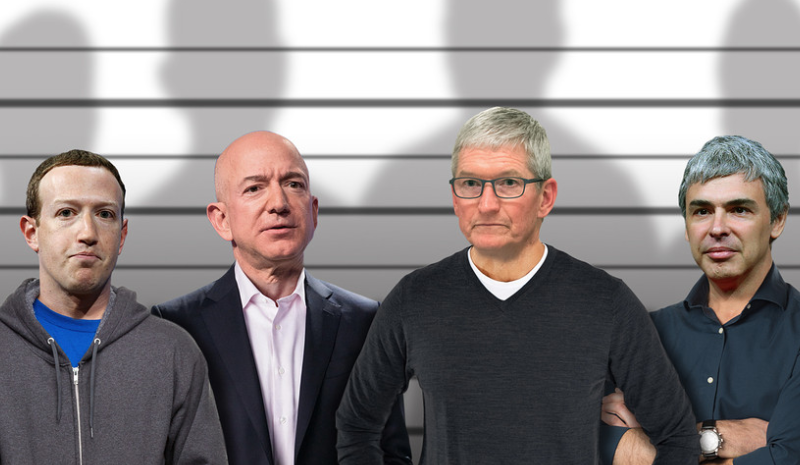 Amid all the talk of antitrust, government regulation and cryptocurrency plans, it might be nice for Big Tech just to focus on earnings this week — unless they are bad, of course.

Three of the four Big Tech companies reportedly being investigated by the federal government for potential antitrust charges will report earnings this week, in Facebook Inc. FB, -1.93%, Alphabet Inc. GOOGL, -0.33% GOOG, -0.50%, and Amazon.com Inc. AMZN, -1.35% , while the fourth — Apple Inc. AAPL, -0.79% — waits for the next week. They will be joined by two other companies that have the full attention of Wall Street: Wounded airplane manufacturer Boeing Co. BA, -3.69% and heavily doubted electric-car maker Tesla Inc. TSLA, -13.61%

Those reports are just a few of what will be a flurry of earnings in the busiest week of the season. More than a quarter of the S&P 500 index SPX, -0.53% and exactly a third of Dow Jones Industrial Average DJIA, -0.47% components are expected to report by the time the bell rings on Friday.

Amid fears of a potential earnings recession, which would occur if S&P 500 earnings dropped for the second quarter in a row, the coming onslaught of reports will likely set the tone for the market. Trade will remain another key theme, as at least nine S&P 500 constituents have already blamed geopolitical issues for weak performance in recent weeks.

Here’s what to watch for this week.

Cars, trucks, and things that fly
The most important number for Tesla will be its sales outlook, after the car maker already reported better-than-expected deliveries for the second quarter but declined to restate its forecast as it did with first-quarter deliveries. Barclays analyst Brian Johnson is concerned about “demand pull forward” that could hurt Tesla’s second-half numbers, and will be looking for profit commentary given his view that the company “prioritizes delivery volume above margin.”

Boeing also reports Wednesday, but got a jump on the results this week. The company decided to be upfront about its continued 737 Max issues, disclosing that it expects to take a $5.6 billion hit to second-quarter revenue and pretax earnings as a result of the problems with these aircraft. The commentary struck Morgan Stanley analyst Rajeev Lalwani as a “positive” and “an opportunity to resume the upward narrative given a degree of clarity ahead.”

Social standing
A flurry of big internet companies are on the docket for the week ahead, including Facebook, Alphabet, Twitter Inc. TWTR, -1.58%, Amazon and Snap Inc. SNAP, +0.45%

Facebook will look to move the conversation “away from putting out privacy fires and back toward innovation,” according to Barclays analyst Ross Sandler. Though spending remains an issue for Facebook this year, Sandler will also be looking for signs that advertisers are coming around to the “stories” format. On Twitter, he’ll be watching for commentary on the company’s efforts to increase the number of ads it shows to users, especially since second-half results will be compared with a strong year-ago period.

Look for Amazon to provide disclosures on investment spending as well, especially as the company tries to make one-day shipping the new standard. The company will still be able to rely on its AWS and advertising businesses to help its operating margins, according to Stifel analyst Scott Devitt, though he expects Amazon’s investment activity to weigh on its margin outlook.

Snap has been the best performing of the four social stocks in the lead-up to earnings, and the key question is whether the company can show strong enough user growth to justify its massive 2019 rally. The disappearing-messages company reports results on Tuesday afternoon, followed by Facebook on Wednesday and both Amazon and Alphabet on Thursday. Twitter closes out the week with a Friday morning report.

Intel is the biggest name this week, amid reports that suggest the CPU shortage is behind it. The chip maker likely benefited from a rebound in the PC market last quarter, but the company’s server business may feel an impact from the U.S. government’s ban on technology sales to Huawei Technologies Co.

Intel’s Thursday report will be preceded on Tuesday by Texas Instruments Inc. TXN, -1.28% , which has been known to throw up a warning signal in its report, and one of the hottest younger names in the semiconductor sector, Xilinx Inc. XLNX, -3.44% , on Wednesday. Intel’s biggest rival, Advanced Micro Devices Inc. AMD, -1.29% , will report the next week.

Money machines
Both Visa Inc. V, -0.95% and PayPal Holdings Inc. PYPL, -5.09% likely benefited from strong consumer spending during the second quarter, but some of the most revealing elements of their conference calls will concern business initiatives beyond traditional card purchases.

Visa recently launched B2B Connect, a commercial payments platform, and it’s been gaining traction with Visa Direct, a technology that lets gig-economy companies immediately pay their workers using the debit-card rails. PayPal already told investors to expect a big impact from its recent investments, and it will provide an update on its efforts to generate revenue from its Venmo user base.

Their reports come as Facebook has generated regulatory attention for its cryptocurrency ambitions. Visa will post results after the closing bell on Tuesday, and PayPal follows the next afternoon.

Telecommotion
Telecommunications names are especially hot, as T-Mobile U.S. Inc.’s TMUS, -0.87% deal for Sprint Corp. S, -2.87% continues to await approval. But a big focus when AT&T Inc. T, +1.71% posts results Wednesday morning may be its video business, which showed continued signs of decay last time around. Expect another quarter of significant video-subscriber losses on Wednesday, though AT&T might be able to distract investors through talk of its streaming-video ambitions: After a disappointing quarter for Netflix Inc. NFLX, +2.68%, Wall Street will want to know more about AT&T’s plans to create a new streaming offering.