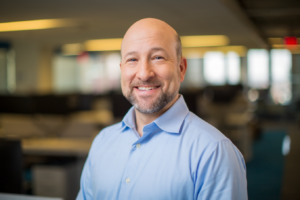 A week after receiving an FDA fast track designation for its phase 1 Parkinson’s disease therapy candidate, Bayer’s BlueRock Therapeutics moved its CEO and president to the role of board chair and promoted its chief scientific officer to fill those roles.

The internal executive moves come less than two months after BlueRock entered clinical development in Parkinson’s with its stem cell therapy, which Bayer picked up in an acquisition worth about $1 billion in 2019.

Current President and CEO Emile Nuwaysir, Ph.D., is moving to the board chair role on August 1, where he will continue to provide support on corporate strategy and R&D. Filling Nuwaysir’s posts is Chief Scientific Officer Seth Ettenberg, Ph.D., the company said Monday.

“We have begun our journey to change medicine and to address some of the most devastating degenerative diseases, where currently we can only offer a slowed trajectory of deterioration. Our mission is to create a living medicine that can address the complex nature of these diseases, and in turn, create hope not just for treatment of symptoms, but for a cure. I cannot imagine a more exciting time to lead BlueRock,” Ettenberg said in a statement.