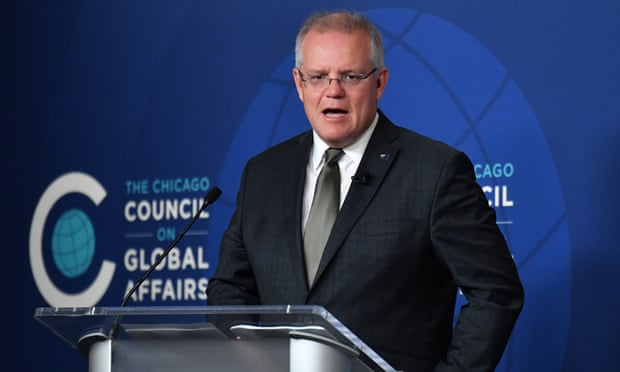 Speaking fresh from a visit to Beijing, Marles said that Morrison’s “megaphone diplomacy” alongside Donald Trump about China’s status as a developing country had inflamed tensions.

“What we saw this week was the prime minister in the United States in the context of there being trade tensions between the US and China, and from there, taking pot shots against our largest trading partner,” Marles said.

“The context in which he has engaged in this megaphone diplomacy is absolutely the issue, and it’s not the way in which this issue should be dealt with in a respectful way.”

Following calls from Morrison and Trump for China’s status to be upgraded from a developing country, as defined under World Trade Organisation rules, Marles said it was a “matter of fact” that China was still rightly defined as developing.

He pointed to average income figures for China as being less than $10,000 – below the World Bank threshold of $12,000 for a “developed” country, and compared to Australia’s average income of $47,000, according to the same index.

“China is a very large economy and it will become the largest economy in the world … and it is still developing, that’s the matter of fact,” Marles said.

After a series of meetings with officials in Beijing, Marles said that while he did not want to comment directly on how China had reacted to Morrison’s remarks in the US, he had heard clearly that the relationship was not in good shape.

“What I can say is that the state of the relationship as it exists between Australia and China right now is terrible,” Marles said.

“There is a sense in which we are falling down their ladder of relevance, that China is not seeing us in the serious way in which it has seen us in the past.”

He accused the government of mismanaging the “complex” relationship, which would have ramifications for Australian jobs dependent on exports.

He said an opinion piece written by the Liberal MP Andrew Hastie had been raised with him as an example of Australia’s disregard for China.

“That did resonate in Beijing,” Marles said. “People are unhappy about it. There is no moral equivalence between China and Nazi Germany. It’s a ridiculous thing to say and it’s damaging to the relationship.

“If you ask the question – has the relationship been managed well from an Australian point of view over the last six months – the answer is that it has been managed terribly,” Marles said.

He said the government needed to do more to address the trust deficit between the two countries, saying joint defence exercises was one way this was occurring.

“Right now, we have a massive trust deficit in terms of our relationship with China, and we need to build trust,” he said.

“If we’re engaging, then we need to be having the best relationship with China that we possibly can have. And right now, this government is not delivering it. In fact, they’re inept.”

But he also said Australia needed to be able to raise issues of concern, such as human rights issues, within that relationship.