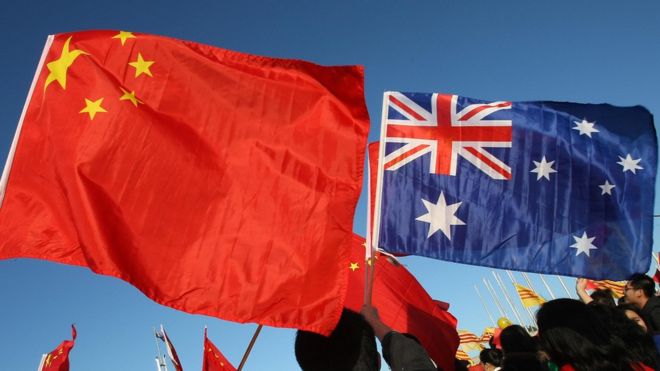 Australian intelligence officials have confirmed they are investigating allegations of a plot to plant a Chinese spy in the nation’s parliament.

The allegations – first aired by local network Nine – assert that a suspected Chinese espionage ring approached a Chinese-Australian man to run as an MP.

The Australian government has said it is taking the allegations seriously, following a rare public statement from the nation’s domestic spy agency.

China is yet to respond to the claims.

What are the allegations?

He was found dead in a hotel room in Melbourne in March. His death has prompted a coroner’s inquiry.

What other claims have been made?

Nine has also reported that a man claiming to be a Chinese spy has applied for asylum in Australia, in an unrelated case.

Wang “William” Liqiang has reportedly given authorities information about operations in Hong Kong, Taiwan and Australia, saying he was “personally involved” in espionage work.

Mr Wang also told 60 Minutes that he was aware of several Chinese spies operating in Australia and attempting to influence politics.

Chinese officials have dismissed Mr Wang’s claim, and say that he is an unemployed fugitive who was convicted of fraud.

What has been the response?

In a statement, Asio director-general Mike Burgess said his agency was taking the allegations seriously.

“Australians can be reassured that Asio was previously aware of matters that have been reported today, and has been actively investigating them,” he said.

He said he would not comment further in line with “long-standing practice”, but added: “Hostile foreign intelligence activity continues to pose a real threat to our nation and its security.”

MP Andrew Hastie, who heads the parliament’s intelligence and security committee, told 60 Minutes he had been aware of the “very, very concerning” allegations for months.

“[It is] like something out of a spy novel happening in Melbourne with impunity,” he said.

“It has to be a relationship between sovereign nations and we will continue to call out any issues and deal with any issues as they arise,” Finance Minister Mathias Cormann said.

There is an ongoing debate about Chinese influence in Australian politics and society.

Some politicians have accused Beijing of trying to infiltrate Canberra through donations and other means. Others, however, believe the allegations are fuelling xenophobia and harming relations between the two countries.

At the time, then Prime Minister Malcolm Turnbull acknowledged “disturbing reports about Chinese influence” – an assertion that has been consistently denied by Beijing, which has sometimes accused Australia of having a “Cold War mentality”.

Earlier this year, a newly elected Chinese-Australian MP, Gladys Liu, faced intense scrutiny after her past links to Beijing-associated groups were revealed by Australian media. She strongly denied having any divided loyalties, and Prime Minister Scott Morrison asserted she had been the victim of a “smear” campaign.