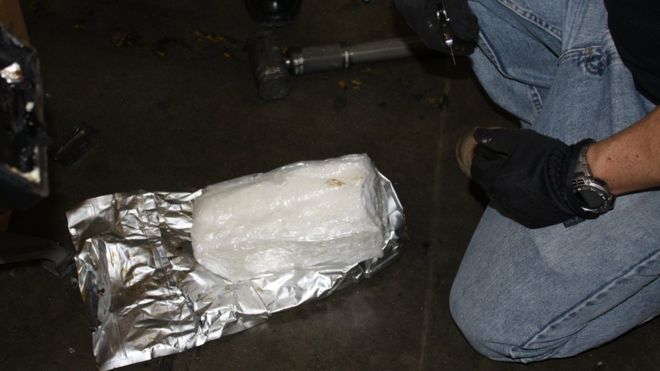 Australian police have arrested six people in Victoria and New South Wales after the biggest seizure of crystal methamphetamine in US history.

Authorities say the 1,728kg (3,800lb) stash – the largest ever intercepted drug shipment to Australia – was found in January at a port in California.

Three of those arrested appeared at Melbourne Magistrates Court on Friday.

Among the suspects are two Americans: a 52-year-old man and a 46-year-old woman. Australian Federal Police (AFP) say they were found with “hundreds of thousands of dollars of proceeds of crime” during a raid in Melbourne.

They are believed to be involved with a US-based crime syndicate that tried to smuggle the drugs in containers marked as carrying audio equipment.

“By stopping this, we have ensured criminals will not profit from the immense pain these drugs would have caused our community,” AFP Assistant Commissioner Bruce Hill told reporters.

The arrests are part of an ongoing joint investigation by local and national agencies in the US and Australia.

In 2015, Australia’s government established a national taskforce to tackle the growing use of crystal methamphetamine (dubbed “ice”), which has become the most common illicit drug in the country.

The move followed a report by the Australian Crime Commission (ACC) that found crystal meth posed the highest risk to communities of any illegal substance.

Crystal meth is a powerful form of amphetamine and can be smoked, snorted or injected by users.

The ACC says the price of crystal meth in Australia is among the highest in the world, driving the country’s organised crime gangs to trade increasingly in the drug.

Commissioner Hill said police believe Mexican cartels are targeting the country, but the identities of the cartels have not been disclosed.

The previous record for an Australia-bound crystal meth seizure was 1,300 kg in 2017.