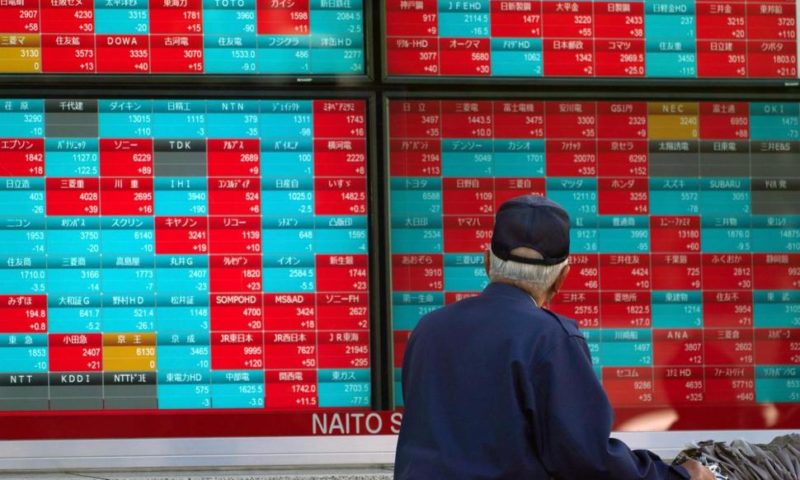 SINGAPORE — Asian markets were mostly higher Thursday on hopes for Chinese government help for the economy as manufacturing slows.

WALL STREET: A rally by retailers and technology and internet companies led major indexes higher on Wednesday. Companies like Facebook and General Motors posted strong earnings, boosting investor confidence amid rising interest rates. The S&P 500 index gained 1.1 percent to 2,711.74. The Dow Jones Industrial Average edged up 1 percent to 25,115.76 and the Nasdaq composite jumped 2 percent to 7,305.90. The Russell 2000 index of smaller-company stocks rose 0.3 percent to 1,511.41. Despite the push, U.S. stocks finished October with their worst monthly loss in seven years.

CHINESE STIMULUS: Manufacturing in China slowed in October, according to official data, triggering concerns over the effects of tariffs on businesses despite official assurances. In a statement on Wednesday, the State Council, China’s Cabinet, said there was a need for “timely countermeasures” and that “some policy effects needs to be further released”. The hint of more stimulus lifted markets in Asia.

ANALYST’S TAKE: Fiscal stimulus by the Chinese government is a tricky affair as it would weaken its currency, Michael Every, senior Asia-Pacific strategist at RaboResearch, said in a commentary. “That is something they don’t want, partly to prevent capital flight, and partly because Washington is watching like a hawk on that front,” he added.

ENERGY: Oil prices continued to weaken on news that U.S. crude stockpiles increased for the sixth straight week. Benchmark U.S. crude dropped 18 cents to $65.13 per barrel in electronic trading on the New York Mercantile Exchange. The contract dropped 87 cents to settle at $65.31 a barrel in New York. Brent crude, used to price international oils, shed 21 cents to $74.83 per barrel. In the previous session, it dropped 91 cents to $75.04 a barrel.

Turkey Begins Oil and Gas Search That Could Stoke Tensions