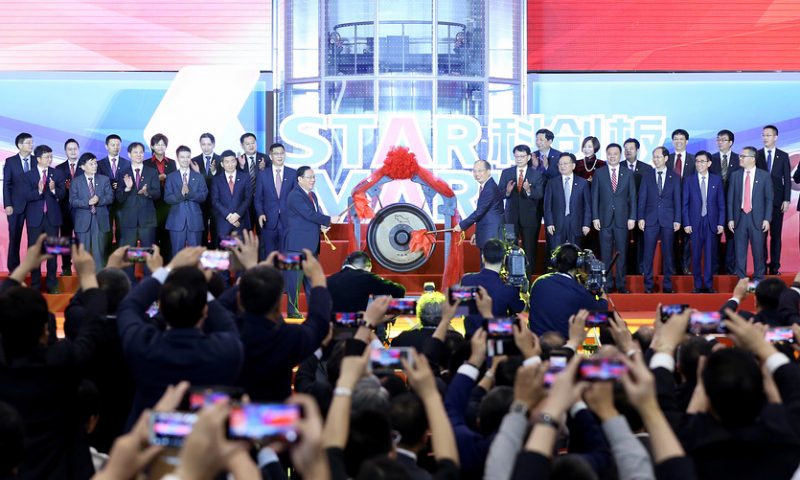 Asian shares were mostly lower Monday after Wall Street ended last week lower as investors continue to watch for what may be in store for U.S. interest rates.

In Shanghai, the STAR market, a Nasdaq-style board of 25 tech companies, began trading. Shares surged in early trading, thanks to massive oversubscription in IPO shares by retail investors. Trading in the new market is expected to be volatile in the early going. “Initially, there could be trading imbalances between supply and demand, and the market should look at fluctuations in a reasonable way,” Liu Ti, deputy general manager of the Shanghai Stock Exchange, said recently, according to Reuters.

“If I had to quantify the equity market risk, it’s 90% Fed policy, and 10% geopolitical worries as investors remain wholly captivated by the looser the policy, the better the risk opportunities,” Stephen Innes, managing partner at Vanguard Markets, said in a note Monday.

U.S. stocks pulled further back from their records on Friday to cap the weakest week for the S&P 500 since May as sentiments turned lower after Iran said it seized a British oil tanker, the latest escalation of tensions between Tehran and the West.

Momentum for U.S. stocks has slowed since early June, when they began soaring on expectations that the Federal Reserve will cut interest rates for the first time in a decade to ensure the U.S. economy doesn’t succumb to weaknesses abroad. The Fed’s next meeting is scheduled for the end of this month.

“With the markets wholly captivated by the looser the policy, the better the risk opportunities, investors could remain singularly focused on the Federal Reserve, and the European Central Bank policy decision and communications as global equity markets continue to have their ups and down based on the perceived degree of accommodative central bank policy,” said Stephen Innes of Vanguard Markets said in a commentary.