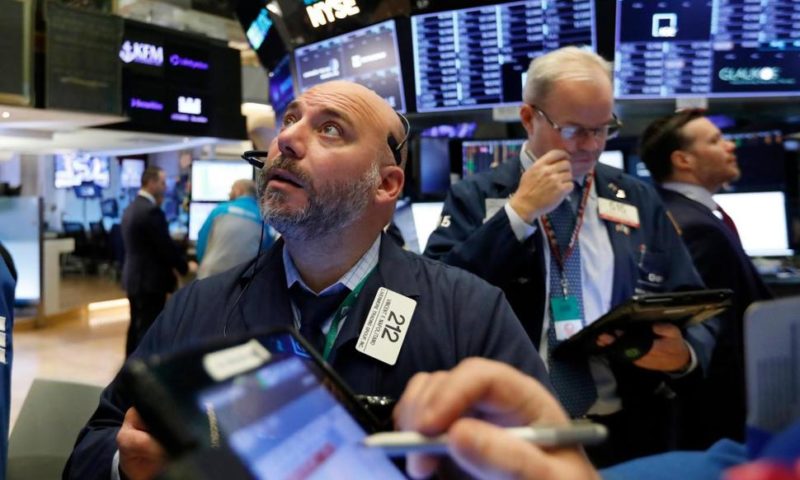 Asian shares fall on sign of escalating tensions ahead of Trump-Xi meeting.

SINGAPORE — Asian markets fell on Wednesday after a trade dispute between the U.S. and China stalled a weekend meeting, dimming hopes that it could be resolved once their leaders meet.

WALL STREET: Broad losses by the world’s largest technology companies pulled U.S. indexes lower on Tuesday and into the red for the year. They were reacting to new national security regulations proposed by the Trump administration, which could limit exports of high-tech products in fields like quantum computing, machine learning and artificial intelligence. Apple plunged 4.8 percent, Microsoft lost 2.8 percent and IBM gave up 2.6 percent. The S&P 500 index fell 1.8 percent to 2,641.89 and the Dow Jones Industrial Average tumbled 2.2 percent to 24,465.64. The tech-heavy Nasdaq composite shed 1.7 percent to 6,908.82. The Russell 2000 index of smaller-company stocks dropped 1.8 percent to 1,469.01.

US-CHINA TENSIONS: Over the weekend, a meeting of 21 nations at the Asia-Pacific Economic Cooperation summit in Papua New Guinea ended without a final communique. That put the spotlight on a trade dispute between China and the U.S. that shows no signs of abating. Draft versions of the communique showed that the U.S. wanted strong language against what it says are unfair Chinese trade practices, while China wanted clear opposition to protectionism and unilateralism. U.S. President Donald Trump and his Chinese counterpart Xi Jinping are scheduled to meet at Group of 20 summit later this month, but it is unclear if the talks will spur a reduction in tensions.

ANALYST’S TAKE: Attempts by the U.S. to condemn certain trade practices were a “surprise” as many expected that “the heat may have come out of the issue” after the midterm elections, Michael McCarthy, chief market strategist at CMC Markets in Sydney, said in an interview. “The simultaneous pressure on industrial commodities and shares points to an escalation of global growth concerns,” he added.

MedMen cuts fundraising round nearly in half, as CFO quits