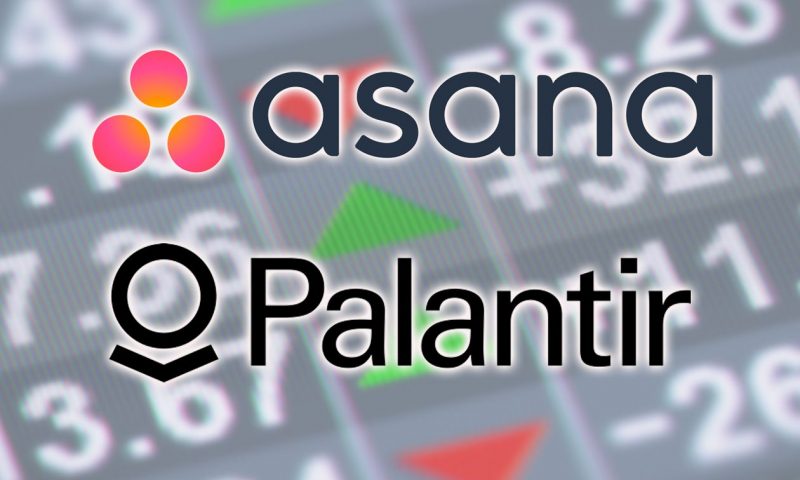 Asana Inc. and Palantir Technologies Inc. both debuted Wednesday in dual direct listings with shares of the two software companies with ties to Facebook Inc. finishing up more than 30% above their reference prices.

At 1:40 p.m. Eastern, Palantir PLTR, +31.03% shares started trading, bolting out of the gate, rising more than 50% higher than the reference price. Shares finished up 31% at $9.50, following an intraday high of $11.42. NYSE had set a reference price of $7.25 a share based on private-market trades of the stock, and The Wall Street Journal reported last week that the company expected shares to open around $10.

Asana is a collaboration-software company co-founded by Facebook co-founder Dustin Moskovitz, who serves as chief executive, while Palantir is a data-software company co-founded by early Facebook FB, +0.04% investor and board member Peter Thiel. Both companies chose to list their shares directly instead of selling new stock in an initial public offering, a route that was previously taken by Spotify Technology SA SPOT, +0.04% and Slack Technologies Inc. WORK, -0.40%, which were also mature startups that sold shares repeatedly in the private markets and were looking to provide investors with public trading options.

In an interview Wednesday with MarketWatch, Palantir Chief Operating Officer Shyam Sankar said the company made the decision to go public about midway through 2019, with an eye on the back half of 2021. After the pandemic struck, he said the company sped up its timeline to Wall Street.

“COVID really accelerated the business and it became clear it was a time for us to think about” going public sooner, Sankar said.

Sankar called the direct listing “momentous” and “exciting,” and said the company made the decision to list instead of perform an IPO because it did not need capital but did want to offer investors a chance to cash in on their stake.

“We have had incredibly patient investors — especially our most important ones, employees — and this gives them more access to the market immediately,” he said.

Palantir launched its first software platform in 2008, and was long known as a secretive software startup focused on military and law-enforcement issues, courting controversy for its work with the Immigration and Customs Enforcement division of the U.S. government. The company has since launched a second offering that has attracted clients from the private sector, and grown much more vocal about its business, including a public divorce from Silicon Valley in which co-founder and Chief Executive Alexander Karp detailed a move away from California and defended his company’s work for the government.

“We’re happy with the results, but truthfully it is one day of many,” Asana Chief Financial Officer Tim Wan told MarketWatch on Wednesday. “Our focus, long term, is providing value to our 82,000 customers.”

COVID has presented both benefits and challenges, Wan said. An influx of so-called knowledge workers at home has put a premium on available digital tools to help them organize tasks efficiently, which is Asana’s business proposition.

The challenge is that an unspecified number of Asana’s customers are small businesses that have adopted its technology and are suffering through an economic downturn caused by the pandemic.

“Many of our customers adopt our technology in a bottoms-up manner, and there has been a churn among them because of the pandemic,” Wan said.

Asana, a 900-person company based in San Francisco, reported revenue of $52 million for the three months ended July 31, up 57% year-over-year. Its net loss during the period jumped to $41.1 million, compared with a $15.6 million loss for the same period last year. The company has yet to turn a profit.

Despite the COVID-19 pandemic, the market for IPOs has been strong in 2020. Aside from Wednesday’s direct listings, Wall Street was expecting 11 IPOs this week, wrapping up the busiest third quarter for offerings since the dot-com boom, according to Renaissance Capital. Software offerings have been a big part of that, as the pandemic has created demand for strong software offerings that can allow workers to continue performing tasks from home — Snowflake Inc. SNOW, -3.13%, Unity Software Inc. U, -8.04% and others have flourished in their market debuts.