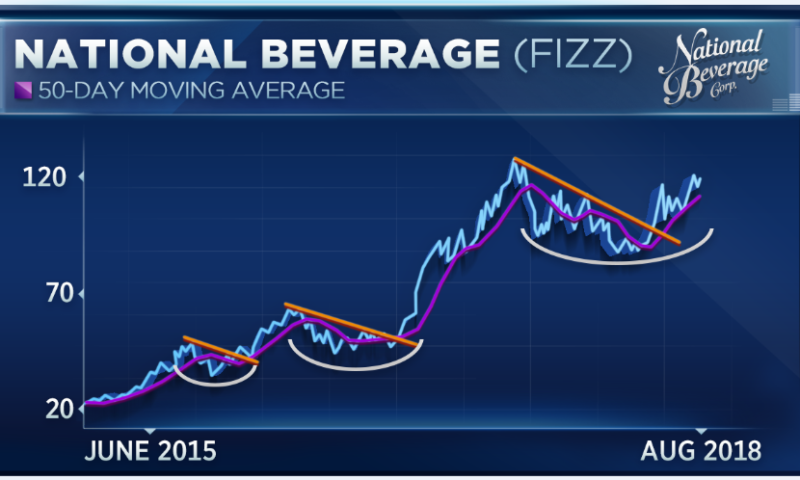 Beverage companies are thirsting to get ahead.

Competition in the beverage space is bubbling up amid shifting consumer tastes, with giants like Coca-Cola, Pepsi and Dunkin’ Brands pushing into new corners of the coffee, tea, soda and sparkling water universe.

Coca-Cola just added coffee to its arsenal, striking a deal to buy British chain Costa Coffee for $5.1 billion; the announcement came just one week after Pepsi said it was buying SodaStream for $3.2 billion. At the same time, Starbucks is retooling its Frappuccino strategy, and Dunkin’ Brands is making a big push into mobile ordering.

Amid the flurry of activity, Piper Jaffray’s top technical analyst says La Croix parent company National Beverage is the top pick in the space now. The stock is up 20 percent this year, though nearly unchanged over the course of the last year. Johnson foresees a breakout ahead.

“I look at FIZZ as really the most attractive, from a trading perspective,” said Piper Jaffray’s Craig Johnson, referring to National Beverage’s ticker symbol.

“This is the third time we’ve made this kind of big base on the charts, and every time we’ve done that, the last two times, we’ve broken out to new highs. I’d say, at minimum, you’ve got at least 10 percent upside, back to $130,” Johnson said. National Beverage shares were trading Tuesday at around $117.75 per share.

Others are less sanguine on the broader beverage space.

“I certainly wouldn’t own Coke or Pepsi. Their main product is soda; that’s in secular decline, and I don’t see that changing at all,” Mike Binger, president at Gradient Investments, said Friday on “Trading Nation.”

“As I look across the landscape, I look at beer, I look at soda, liquor and I just don’t see any opportunities. It’s a big market; you can look elsewhere,” he said, adding he would rather own financials or industrial stocks, citing more reasonable valuations.