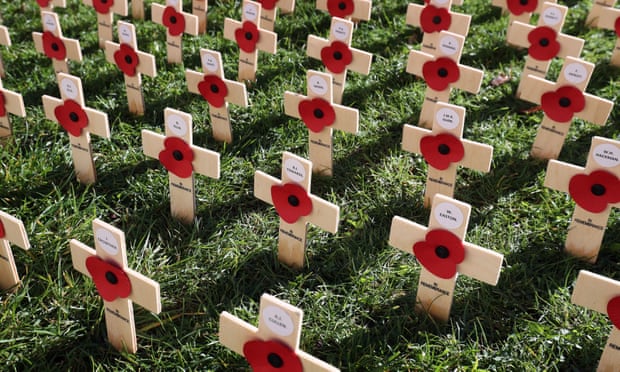 German president to lay wreath at Cenotaph on Remembrance Day

Theresa May has praised the “strength and closeness” of the UK’s relations with “our friends and partners in Europe”, as she prepares to join the German and French presidents in a series of events to mark 100 years since the end of the first world war.

As the world gets ready to commemorate 11 November 1918, when more than four years of fighting that cost an estimated 37 million military and civilian lives came to an end, the prime minister said: “Next week will mark one of the most significant moments in our nation’s history. One hundred years after the guns fell silent on the western front, each and every one of us can pause to reflect on the immense sacrifices that were made by so many.

“The killing fields of France and Belgium are scarred by the horrors of war, but the strength and closeness of our relationship today is a testament to the journey our countries have travelled together. I’m proud to represent the immense gratitude of our nation at these commemorations and share these moments of reflection with our friends and partners in Europe.”

Next week, on Remembrance Sunday, the German president, Frank-Walter Steinmeier, will perform a historic gesture of reconciliation when he will become the first leader of his country to lay a wreath at the Cenotaph in Whitehall. Later in the day Steinmeier will attend a service in Westminster Abbey alongside the prime minister. The Queen and other senior members of the royal family will also be present.

Afterwards beacons will be lit across the country. The events will mark the climax of a programme that has been minutely planned for months. May will visit next Friday the St Symphorien Military Cemetery in Mons, Belgium, where some of the first and last shots of the war were fired. She will lay a wreath at the graves of John Parr – the first UK soldier to be killed in 1914, and the last, George Ellison, who lost his life at 9.30am, 90 minutes before the Armistice became effective at 11am on 11 November 1918.

She will then travel to France to meet President Emmanuel Macron in Albert, in the Somme, which saw some of the heaviest casualties and most intense fighting of the entire war. The two leaders will attend a ceremony at the Thiepval Memorial, the site of an annual commemorative event for the missing of the Somme which bears the names of more than 72,000 officers and others soldiers who died in the battle.

A special wreath will be made for the occasion, combining poppies and le bleuet, the two national emblems of remembrance for Britain and France.

The event will have particular significance for Macron, who was born in nearby Amiens and grew up in an area of France scarred by the conflict. His British great-grandfather fought at the Somme and was decorated for bravery.

Macron is embarking on his own five-day armistice journey to pay tribute to those who died. He will begin in Strasbourg, where he will meet Steinmeier and end in Compiègne on 11 November, where he will host a Franco-German ceremony with Angela Merkel, the German chancellor.

Commemorations will also take place today in Ors, in northern France, to mark the death of the war poet Wilfred Owen, who served in the Manchester Regiment and was shot dead while commanding an operation to a build a bridge across the Sambre-Oise canal, excactly a week before the war ended. Owen had written home to his mother a few days earlier saying the war would be over soon and urging her not worry.A bugle taken by Owen from a dead German soldier is to be played near his grave in Ors, close to where he fell. A group of schoolchildren from Manchester will also attend.

Owen wrote about the bugle in 1917, according to Fiona MacDonald, of the Wilfred Owen Association. She told BBC Radio 4’s Today programme: “We know from a letter that he wrote to his brother, Colin, in May 1917 that he had got this bugle. He said ‘I’ve got some loot’. And he was going to give it to Colin but he said that he had grown too fond of it to part with it.”

Next Sunday bells will ring out across the country throughout the day. In early morning more than 3,000 bell towers across England, Scotland, Wales and Northern Ireland will ring out with the sound of “half-muffled” bells, like a slow march, in memory of those who lost their lives. Then, at midday, bellringers will remove the muffles from the clappers and at about 12.30 they will ring open to evoke a spirit of gratitude and thanks.