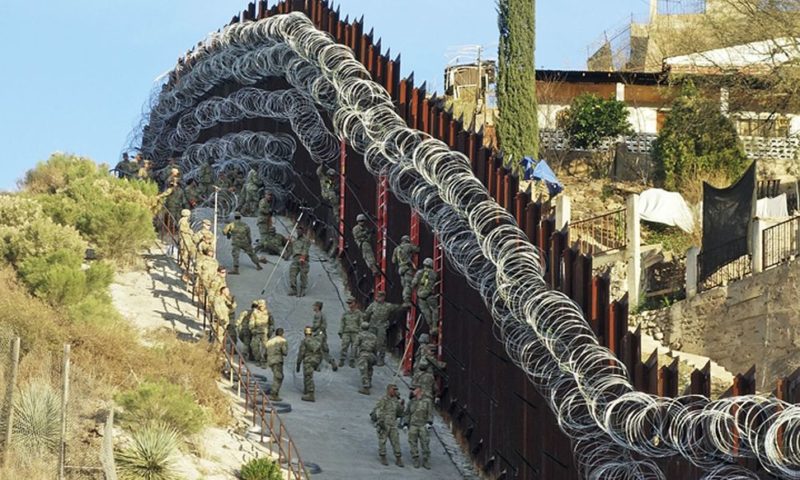 A border town in Arizona says it will sue if the government does not remove the barbed wire from the border wall.

OFFICIALS IN AN Arizona city on the U.S.-Mexico border want the government to remove razor wire from a border wall that runs through town.

The City Council of Nogales, Arizona, adopted a resolution on Wednesday “condemning the use of concertina wire as an indiscriminate use of lethal force by the federal government.”

Nogales is home to about 20,000 residents, and a wall as high as 20 feet runs through the town separating it from Mexico. The resolution states that every day, hundreds of “law abiding citizens” from the U.S. and Mexico cross the border and come into contact with the wall.

It says the city “recognizes the importance to cross border trade and business with Mexico as its most important economic resource.”

“The City of Nogales desires to maintain a safe and secure border for all without impeding or giving the perception of impeding the lawful and efficient crossing of goods and people,” the resolution states.

The military began installing the barbed wire at the ports of entry along the wall in November. Although the wire was only installed on top of the wall initially, earlier this month, troops started placing wire in horizontal rows from the top of the wall to the ground. Now, the city is concerned that the razor wire poses a threat to safety.

City officials wrote that the concertina wire, with its “sharp razor-like blades” designed to entangle people who come into contact with it, will “slice and cut deeply into the flesh and cause indiscriminate injury, which can be fatal.”

City officials say it poses a threat to the safety of residents, children, pets, law enforcement and first responders.

The council is asking that the government “take immediate action” to remove all the razor wire from the border wall within Nogales. It also demands that the troops not use force or military tactics within the town.

If the actions are not taken, Nogales Mayor Arturo Garino said the city will sue.

NBC News reported that U.S. Customs and Border Protection said it added the wire because of a request for more “support in high-risk urban areas commonly exploited by criminal smuggling organizations.” It did not state who made the request.