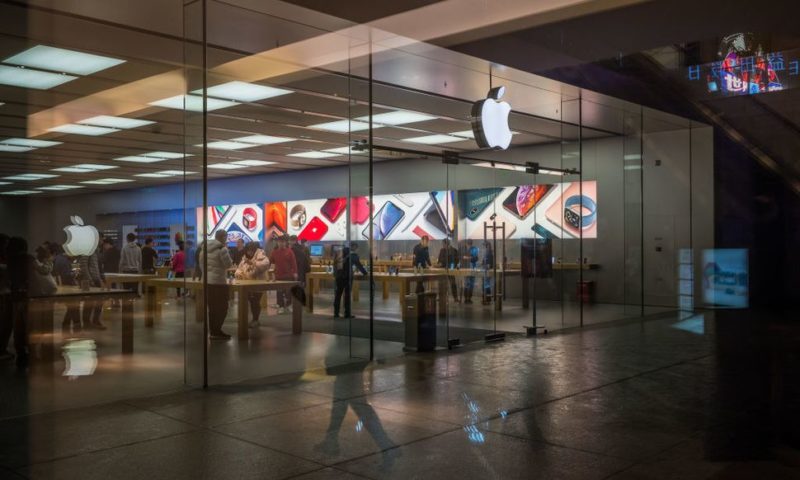 The falling iPhone sales amid an ongoing trade war between Beijing and Washington have sparked concerns about the cooling of China’s economy.

APPLE’S ANNOUNCEMENT that it reduced its revenue expectations for the first time in 16 years due to poor iPhone sales in China spurred global instability Thursday, causing its share price to drop, the U.S. dollar to fall against the yen and markets to dip in both Asia and Europe.

The news – and the reaction to it – is perhaps the starkest signal yet that China’s economy is decelerating.

It comes amid an ongoing trade war between Washington and Beijing following the Trump administration’s demands that China reform its domestic economic policies and trade deals with the U.S. – likely another central element to the Asian giant’s cooling economy.

Some analysts are fearful of the intensity of the drop in domestic sales while China and the U.S. still reel from an ongoing trade war. The concern is that after decades of fevered annual growth in its gross domestic product, a cooling in China is just a harbinger of a worldwide economic slowdown.

“People expected that was coming. The difference is the severity. It was more intense than we expected,” says Joseph Foudy, a professor of economics at New York University’s Stern School of Business. Foudy believes the reports this week are indicative of China’s economic long-term transition. He adds, “but we should be worried about the economy in the next few years.”

Tim Cook offered an optimistic explanation in a Wednesday letter to investors, saying the California-based tech company “did not foresee the magnitude of the economic deceleration, particularly in Greater China.”

“Market data has shown that the contraction in Greater China’s smartphone market has been particularly sharp,” Cook wrote, adding, “Despite these challenges, we believe that our business in China has a bright future.”

Some believe other factors, including the trade war, had more to do with Apple’s poor sales in China.

“The most important factor, I would say, is strong competition from local Chinese competitors or challengers such as Xiaomi and Huawei,” says Haiyang Li, a professor of strategic management and innovation at Rice University’s Jones Graduate School of Business. He spoke with U.S. News from Beijing, where he is currently traveling with a group of students that visited the Xiaomi headquarters earlier this week. “These local competitors have better product designs (in terms of functionality rather than technologies) for better satisfying customer demand and they also have much lower prices.”

Li and others also cited the changing cellphone market, particularly in China where many potential buyers have smartphones only to access one or a few local apps like WeChat. These users are more interested in the latest software, not the “bells and whistles” of the newest iPhone, for example.

Others say the news from Apple does not necessarily spell doom for future investments in China.

“The correct conclusion should be that China’s going through a downturn in its business cycle but that consumer spending is still expected to grow over the medium- to long-term,” says Scott Kennedy, director of the Center for Strategic and International Studies’ Project on Chinese Business and Political Economy.

Kennedy cites Beijing’s heavy and constant interventions into its own economy, particularly its efforts to rein in credit over the last year and a half directed mostly at businesses but also at limiting mortgage borrowing.

“We’re headed into the bottom of the Chinese business cycle,” he says. “That eventually trickles down to affect consumer behavior.”

Sales of iPhones are not necessarily an indicator of middle-class spending in China, Kennedy adds, where their $1,000-or-so price tag would account for 10 percent of the typical Chinese person’s annual income. “So that wouldn’t be to me the bellwether for China’s economy as a whole.”

Not all consumer products in China are sliding right now. Its state media stressed last week that underwear sales are booming in Liaoning Province in its northeastern rust belt – perhaps a Chinese version of high heels as an American economic indicator. However, at least some Western analysts dismissed the viability of the reports as “skeptical.”

And unlike other car sales in China, purchases of Audi grew this year, topping Mercedes for the first time. That, though, may be due to Audi’s designing locally built cars specifically for the Chinese market.

“[Audi is] a standout from a very soft consumer market, almost across the board,” Kennedy says.

Some who work with small businesses say there is no upshot to the tariff war currently ongoing between Beijing and Washington, though the subsequent reforms could be helpful.

‘If there can be a silver lining, I’m hoping these negotiations that happen with the administration are successful, and they can reach some kind of understanding, some kind of truce,” says Sage Chandler, vice president of trade policy at the Consumer Technology Association, citing the White House’s stated intent for China to increase its economic transparency, intellectual property practices and forced technology transfer reforms. “The upshot is that the two sides are talking and there is a real willingness from both sides to see something happen, because we don’t want for us to be in a game of just-wait-and-see-who’s-going-to-blink-first.”

As for future indicators of the strength of China’s economy, Foudy recommends looking to auto sales, and the extent to which foreign firms are still able to compete against domestic alternatives in China, like Huawei.

“Domestically, look at two worlds of technology: China-based and difficult for foreigners to access, and the rest of the world, which is less welcoming of Chinese tech companies,” he says.

Should the US hand over Minnesota’s Northwest Angle to Canada?