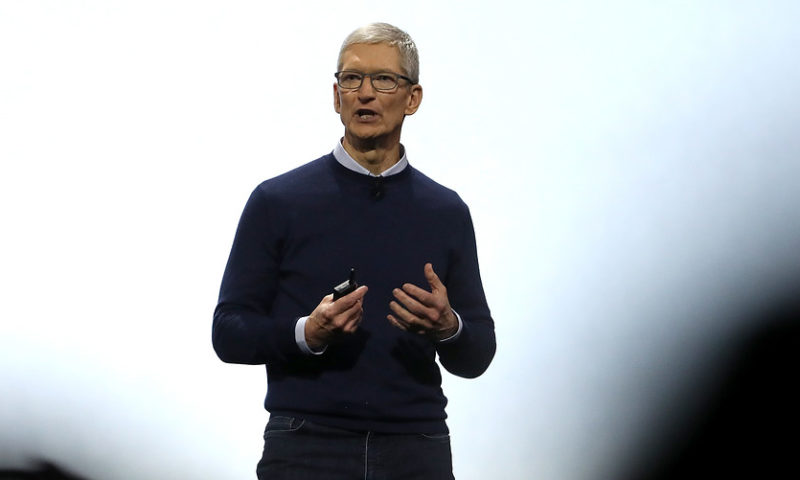 Apple falls in late trading despite earnings beat, thanks to forecast that appears cautious for several reasons

That wasn’t good enough for investors, though.

The smartphone manufacturer on Thursday reported that it had grown revenue by 20% in its fiscal fourth quarter, thanks in part to strong momentum for the latest iPhones. The iPhone business grew by the largest percentage in years, rising 29% as the iPhone XS and XS Max hit shelves.

Those numbers were somewhat of an anomaly, to be sure: Part of Apple’s AAPL, -6.63% September quarter this year featured two expensive new phones, whereas the company hadn’t yet rolled out the pricey iPhone X as of the end of its year-earlier quarter. That creates a rather easy comparison, but also helped lead to a relatively cautious growth projection for the current quarter that helped send shares down 6.5% in after-hours trading.

Apple’s forecast for the December period calls for revenue of $89 billion to $93 billion. Those are staggering numbers that would beat Apple’s quarterly record of $88.5 billion set last year in the holiday quarter. But it also represents sales growth of less than 5% from that performance last year, when the $1,000 iPhone X helped juice sales.

Given the company’s slate of expensive new phones and its proven success getting users to pay up for them, some are wondering why the company wasn’t more upbeat with its forecast.

Chief Financial Officer Luca Maestri gave a few reasons on the company’s earnings call. One is the timing of product introductions, given that early adopters may have bought the pricey new iPhone XS or iPhone XS Max before the current December period began, while last year’s Apple fanatics would have had no choice but to wait until the holiday quarter if they wanted the new iPhone X, then Apple’s flagship device.

“Obviously, this resulted in a more pronounced [average selling price] growth in Q4 of 2018 and obviously a tougher compare for Q1,” Maestri said on the call.

He also cited foreign-currency headwinds, with most major currencies having depreciated against the dollar, as well as “macroeconomic uncertainly” in emerging markets.

Chief Executive Tim Cook clarified during the question-and-answer portion of the call that the emerging markets referenced there are countries like Brazil, Turkey, India and Russia, where currencies have weakened. China was the elephant in the room heading into the report — investors worried about tariffs, spending trends and changes to the gaming landscape — but Cook made it clear that he “would not put China in that category.”

He went on to say that any issues in China appear to be domestic in nature and not the result of trade-war tensions with the U.S.

The final justification for Apple’s forecast was what Maestri curiously described as “uncertainty around supply and demand balance.” The company didn’t specify whether it was worried about issues on the supply or demand side, but commentary on the call suggested Apple potentially meant both.

Maestri mentioned that while the product ramps “are going fairly well,” the company is in the midst of rolling out an “unprecedented number of new products.” Given the ever-changing environment in emerging markets and Cook’s remark that Apple still has “very, very little data” on iPhone XR sales after less than a week of availability, there are moving parts on both ends.

Not discussed much during the call in the context of Apple’s outlook were the introductions of the new MacBook Air, Mac Mini and iPad Pro products. The company announced these devices on Tuesday and is pricing them significantly above their predecessors. This year’s December quarter might be at a disadvantage because it doesn’t get to benefit from the launch day of Apple’s priciest iPhone, but the period does get the benefit of expensive new devices elsewhere in the company’s lineup.

Apple shares have gained 33% over the past 12 months, as of Thursday’s close, while the Dow Jones Industrial Average DJIA, -0.43% , of which Apple is a component, has risen 8%.

Amazon Mum on Reports It Will Split New Headquarters