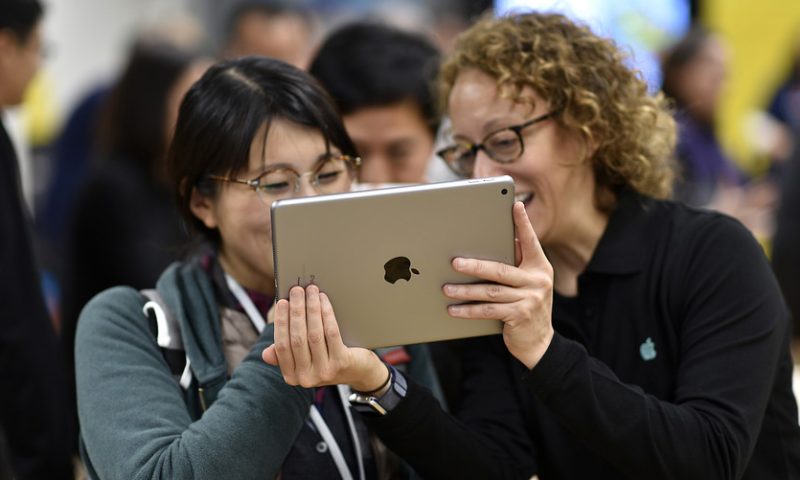 As the iPhone goes, so goes Apple Inc., but maybe not for much longer.

The vast majority of Apple’s AAPL, +5.23% revenue comes from sales of its smartphones, but as smartphone sales have stagnated, Apple has had to look elsewhere for growth. So far, the results in this fiscal year haven’t been great: Apple revenue declined 4.6% year-over-year in the fiscal first quarter, and 5.1% in the second quarter that Apple reported Tuesday.

The tech giant guided for a rebound in the current quarter, however, forecasting revenue of $52.5 billion to $54.5 billion, which would be right in line with last year’s $53.3 billion, despite expectations for another substantial drop in iPhone sales. That guidance helped push Apple’s stock up about 6% in premarket trading, which puts the company’s market cap back on track to $1 trillion.

As Morgan Stanley analyst Katy Huberty pointed out in the conference call Tuesday, that forecast would mean a much smaller sequential decline between the second and third quarters than Apple has historically posted. Huberty said that decline has been around 15% historically, and sales declined 12.7% last year and 15.1% the year before between the two quarters, but Apple’s guidance suggests sales will drop less than 10% sequentially this year.

Chief Financial Officer Luca Maestri provided an interesting answer for why Apple expects that change — he said iPhone sales will only be helped by an easier comparison with last year’s sales, while it will be the other products that actually boost Apple’s revenue.

”We expect that we continue to have strong revenue growth from the non-iPhone categories, as we’ve had for the first half of our fiscal year,” Maestri said, adding that a rebound in China could also help.

The non-iPhone categories were a big help in the second quarter, when iPhone sales dropped more than 18%. Apple’s services revenue was the growth engine, with sales increasing nearly 25% to more than $11.5 billion, while iPad sales continued to show a strong rebound with an 18% increase and wearables jumped nearly 30%. Mac sales declined, but Chief Executive Tim Cook suggested that was due to constraints in sourcing processors — which has been a problem for personal-computer manufacturers amid issues at chip maker Intel Corp. INTC, +0.18% — that could lead to a healthy sequential rebound for PC sales.

Apple executives repeatedly said that sales ticked up toward the end of the quarter, especially in China, which seemed to be the source of Apple’s optimistic forecast. Sales in China fell 21.5% in the second quarter, but that was actually an improvement from the first quarter’s 26.7% decline, and executives repeatedly talked up new pricing initiatives and trade-in programs as having an effect in the world’s most populous country.

“Our year-over-year revenue performance in Greater China improved relative to the December quarter and we’ve seen very positive customer response to the pricing actions we’ve taken in that market, our trade-in and financing programs in our retail stores, the effects of government measures to stimulate the economy, and improved trade dialogue between the United States and China,” Cook said.

Apple must win back some of its China business and get massive growth from its non-iPhone categories to weather the state of its iPhone business right now, and the forecast suggests that executives believe that will happen. Currently, analysts expect iPhone sales to drop 15% in the third quarter, yet Apple believes it can avoid an overall revenue decline.

“The relative stabilization in China is a principal reason Apple can return to overall growth in the June quarter, two quarters earlier than we previously expected,” BTIG analyst Walter Piecyk wrote in a note Tuesday evening, while increasing his price target on Apple stock to $234 from $220. “To be clear, it’s still declining, just not as much and without impacting gross margins as much as we had feared.”

If Apple can at least show even revenue in the second half while continuing to weather iPhone sales declines, Cook and Co. will be able to claim a major win. They could also point to a return to growth next year, which — along with the additional billions coming investors’ way after Apple increased its dividend and share buyback reserves Tuesday — would keep Apple on a lot of “buy” lists. And we aren’t talking about the iPhone, either.