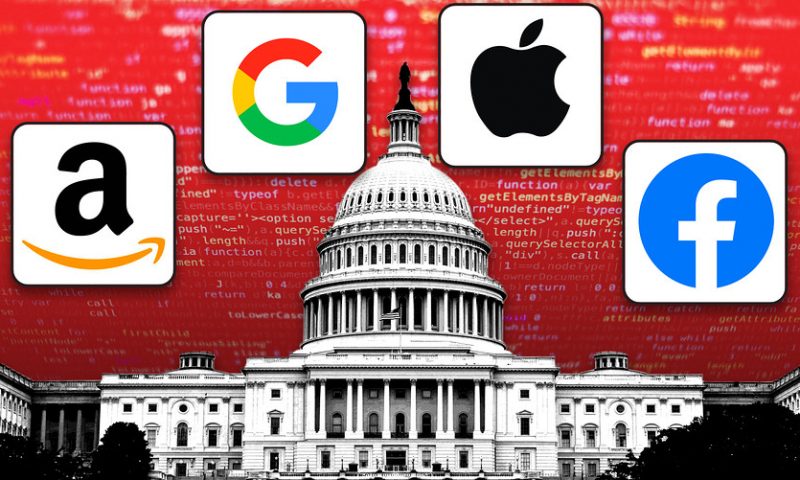 Despite doomsday narrative of tech behemoths being split up or spun off, they continue to rack up record revenue as shares near all-time highs

For roughly five months, the predominant story line in Big Tech has been skirmishes with antitrust regulators and their escalating investigations. And for nearly five months, investors haven’t blinked.

Fear of a looming recession could change all that. But for now, expect more of the same when the four companies under scrutiny report their quarterly results over the next two weeks.

Each companies’ stock gains — Alphabet (up 17% through Monday’s close), Amazon (flat), Apple (up 39%), and Facebook (up 13%) — belie a doomsday narrative of tech behemoths being split up or spun off, as the companies continue to rack up record revenue. Wall Street analysts’ sentiment is best summed up by Wedbush Securities’ Daniel Ives, who looks upon the government threat as nothing more than a series of fines that will lead to modest business reforms at the Big Four.

Makan Delrahim, head of the Justice Department’s antitrust division, told MarketWatch on Tuesday it is uncertain what actions, if any, will be taken against Big Tech.

“We just want to serve the consumer in a tech world,” he said in a one-on-one interview on the sidelines of the WSJ Tech Live conference in Southern California.

What Big Tech has to say is anyone’s guess because the companies have stayed relatively silent on the topic. Indeed, finding references to anti-competitive investigations in company filings can be like panning for gold even as Amazon, Apple, Facebook and Alphabet face a Oct. 21 deadline to reply to House investigators’ requests for information about their business practices.

The antitrust suspects: Facebook and Apple appear to be most at risk

If anything, events of the past week underscore where investors place their true priority. When the Trump administration inched toward an interim trade deal with China, forestalling a tariff increase scheduled for this week, tech stocks soared.

Here is what the companies are saying about the investigations, as well as what is expected when they report calendar third-quarter results in the days ahead.

Analysts on average expect Amazon to report earnings of nearly $2.3 billion on revenue of $68.8 billion during its third quarter, according to FactSet. And that does not include the anticipated award of a $10 billion cloud-computing contract from the Pentagon.

The global public cloud services market is projected to grow to $221.6 billion in 2019 and reach $344.9 billion by 2022, according to market researcher Gartner. The fastest-growing segment, infrastructure as a service (IaaS), is expected to reach $74.1 billion by 2022. AWS is the largest IaaS provider, accounting for 48% of the market in 2018, Gartner analyst Sid Nag told MarketWatch.

As for the impact of a far-reaching regulatory investigation? Amazon has been mum in filings and executives’ public statements about any inquiries.

Alphabet’s Google has been notoriously stingy with financial details even when reporting earnings, so its relative silence on antitrust issues isn’t surprising.

Alphabet Chief Financial Officer Ruth Porat in July did share that sales for cloud and YouTube during the previous quarter were particularly strong, and Google CEO Sundar Pichai disclosed the company’s cloud division reached an annual run rate of over $8 billion, the first financial update on Google Cloud since February 2018. (Google’s advertising, driven by mobile search and YouTube, rose 16% to $32.6 billion, though Porat warned Google expected foreign-exchange headwinds in the third quarter.)

Pichai briefly addressed the “R” word when pressed on the regulatory climate during a conference call with analysts. “We understand there will be scrutiny,” Pichai said. Questions about competition and copyright protection is “not new to us,” he added. The company did not disclose any investigation in its filing with the Securities and Exchange Commission after last quarter’s report.

Government probe or not, Google is well positioned in the second half of 2019 because of “healthy core advertising (innovating around YouTube and Maps, incl. for travel and local), momentum in Google Cloud, and expanded hardware line-up ahead of holidays,” Thill said in a research note on Oct. 15. He gives the stock at Buy rating and price target of $1,500.

Analysts polled by FactSet expect earnings of $12.31 per share on revenue of $40.3 billion in Alphabet’s third quarter.

To date, Facebook has been the only member of tech’s Big Four to disclose in a company filing that it is under federal investigation.

“The online technology industry and our company have received increased regulatory scrutiny in the past quarter,” Facebook said in its second-quarter earnings release after the market closed July 24. “In June 2019, we were informed by the FTC that it had opened an antitrust investigation of our company. In addition, in July 2019, the Department of Justice announced that it will begin an antitrust review of market-leading online platforms.”

None of it seems to faze Facebook investors. The social-networking leviathan has been the poster child for tech’s Teflon-like immunity to federal investigations. Last week, presidential candidate Sen. Elizabeth Warren, D-Mass., who in March proposed breaking up big tech companies, began running a text ad on Facebook blasting Mark Zuckerberg. Facebook’s chief executive, it said, has “given Donald Trump free rein to lie” on Facebook.

Despite a series of embarrassing disclosures around how it collects and handles data, prompting another scheduled appearance before Congress by Zuckerberg on Wednesday, it continues to rack up healthy revenue and membership numbers. Analysts polled by FactSet anticipate a year-over-year 27% hike in revenue to $17.37 billion, and 8% rise in monthly active users, to 2.45 billion.

Still, a MarketWatch analysis of FactSet data found that Facebook was one of five large companies that were the biggest contributors to the earnings recession in the first half of the year. In addition to forking over a $5 billion fine to the FTC for privacy violations this summer, it faces escalating costs to beef up security of its platform.

When Zuckerberg speaks before the House Financial Services Committee on Wednesday, he is expected to tell lawmakers that the company won’t be a part of launching its Libra digital currency anywhere in the world until U.S. regulators approve it.

Apple is on a roll. Its iPhone 11 announcement in September underwhelmed pundits and analysts, but the company’s stock is at an all-time high on projections for a spike in iPhone sales and a brisk start for Apple TV+, its streaming service that debuts Nov. 1.

Wedbush Securities analyst Daniel Ives on Oct. 11 raised his price target on Apple shares to $265 from $245 and maintained an Outperform rating. “In our opinion the lower [iPhone 11] price points, potential content arsenal (through organic and M&A), and massive installed base could enable Apple to disrupt roughly 10% of Netflix’s target customer base within the next 12 to 18 months,” Ives wrote. (UBS and Credit Suisse on Oct. 14 became the latest Wall Street firms to express confidence in iPhone sales.)

The only hitch, analysts agree, is that Apple remains vulnerable to a trade war with China because nearly 20% of its total revenue comes from the region.

Apple, which has been quiet about the regulatory climate, also made MarketWatch’s top-5 list of large companies contributing to the earnings recession. The company’s earnings dropped nearly 15% in the first half of 2019 because of declining iPhone sales, as well as geopolitical tensions with China, where it gleans about 20% of total sales.

FactSet has forecast earnings of $2.83 per share and revenue of $62.9 billion for Apple’s fourth quarter.