European stocks have underperformed the U.S. for so long they simply must catch up — that’s been said before, only to end in frustration. But the right conditions may soon fall into place, according to Europe’s largest asset manager.

With such persistent divergence between the two regions, any good news would give equities on this side of the pond a boost, said Alexandre Drabowicz, deputy head of equities at Amundi Asset Management, which oversees about 1.5 trillion euros ($1.8 trillion). He is considering adding European stocks, after turning neutral on the market, and more positive on the U.S., in May. 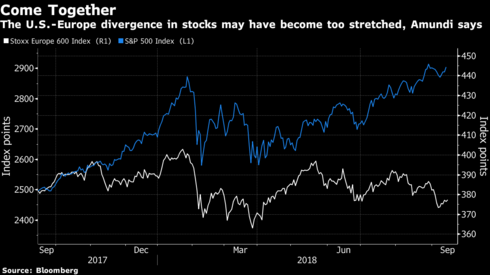 “The elastic is a bit stretched,” he said by phone on Wednesday. “On any positive news regarding Italy or regarding the trade war, the one asset class that will potentially benefit from a reversal would be European equities.”

The region’s stocks have underperformed globally this year, mired in risks from Italy’s potential budget clash with the EU, to rising trade barriers and turmoil in emerging markets. Europe’s equity risk premium is thus close to the widest it’s been since 2012, signaling room for recovery should these risks dissipate. Improving economic momentum since the summer is at least one thing in the region’s favor.

And the showdown on the two risks highlighted by Drabowicz may be coming soon. Italy is expected to set new public finance targets by Sept. 27, whereas he reckons U.S. President Donald Trump may become less bellicose on trade before mid-term elections in November.

Drabowicz’s take comes after Eaton Vance Corp.’s director of global equity Chris Dyer said his team is overweight on Europe and underweight on the U.S — though the two investors differ on European banks. For Drabowicz, turning positive on the sector more broadly would require rising interest rates and consolidation — two trends that are unlikely to materialize in the short term.