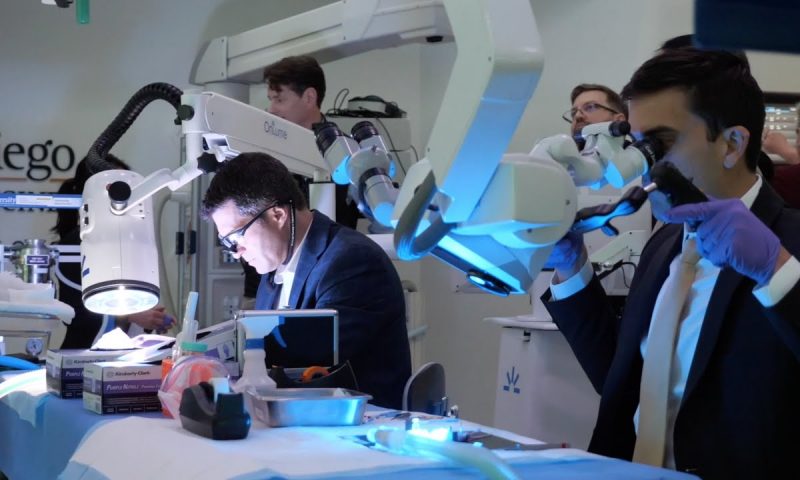 LA JOLLA, Calif., — Alume Biosciences, Inc., a privately held biotechnology company developing nerve-targeted pharmaceuticals for surgical and therapeutic use, today announced that it has completed a Series A funding in the amount of $5.5 million dollars. The Series A round is expected to fully fund a Phase 1/2 study of lead candidate ALM-488, an intravenously administered peptide-dye conjugate for fluorescence highlighting of nerves during surgery. ALM-488 will be examined for both safety and efficacy in a Phase 1/2 clinical trial in patients undergoing head and neck surgery.

Practicing physicians and biotechnology angel investors participated in the Series A round, including co-founder Chrysa Mineo (formerly of Receptos and Neurocrine Biosciences) and Dan Bradbury (co-founder and Executive Chairman of Equillium, Inc. and former CEO of Amylin). “We had overwhelming interest in our Series A round, which was oversubscribed,” said Quyen Nguyen, CEO and founder of Alume. “I am especially excited and grateful that so many surgeons and physicians representing end-users of the technology participated financially in pursuit of making a nerve illumination agent available in the surgical suite in a rapid timeframe.”

Alume will initially target head and neck surgery, where nerve injury may occur in up to 25% of surgeries and can lead to complications including facial paralysis and hoarseness. Following the Phase 1/2, and assuming positive safety and efficacy data, Alume plans to expand clinical applications including high priority indications such as spinal surgery and prostate surgery. Nerve-targeted agents also have the potential to be used in combination with other fluorescent agents for tumor margin delineation during surgery. Illumination agents may also play a significant role in future Artificial Intelligence (AI) enhancements to the surgical suite, assisting physicians to optimize surgical outcomes for patients. Alume is also investigating the potential utilization of nerve illumination agents for cardiac ablation and renal denervation, supported by the expertise of Alume co-founder Brett Berman, MD.  Finally, Alume is investigating the potential utilization of its technology to deliver nerve-targeted pharmaceuticals for therapeutic use.

“The Alume team has demonstrated exceptional development execution to date, rapidly identifying a lead nerve-illumination candidate after company founding and generating significant interest amongst physicians for the initial indication of head and neck surgery,” said Chrysa Mineo, co-founder of Alume. “ALM-488 and related compounds are expected to have broad application across a wide range of surgical indications, reducing operative time for surgeons and most importantly, improving patient outcomes.”

Dan Bradbury, a biotechnology investor whose BioBrit investment fund also participated in the Series A, was struck by Alume’s unique fundraising approach: “It’s not often that you see a Series A round of this size funded primarily by the physicians who will someday use the technology themselves. I saw this groundswell of physician participation and enthusiasm as a very strong signal of the value of the technology when evaluating the company.”

The Phase 1/2 study of ALM-488 in patients undergoing head and neck surgery is expected to begin in Q2 2020. Alume is assembling an exceptional group of advisors to support rapid expansion of efforts once safety and efficacy has been established. Alume has also received an initial SBIR grant from the National Institutes of Health (NIH). Combining elements of groundbreaking nerve illumination assets, exceptional operational execution and efficient capital deployment, Alume is expected to rapidly catalyze advancements in preservation of nerve function in the surgical suite.

Kim Kamdar, PhD, Domain Associates LLC Partner and independent Alume BOD member remarks: “They have made tremendous progress with their lead identification and IND-enabling studies.  Within a blink of an eye, they will turn from an early-stage company to a late-stage clinical phase company with a very interesting, novel technology.”

Magda Marquet, PhD, biotechnology entrepreneur and independent Alume BOD member agrees: “I am very impressed with Alume’s leadership team, its superb execution and capital efficiency. They have built significant credibility around their technology by getting the ‘buy-in’ of the end users, the surgeons themselves.”

About Alume Biosciences, Inc.
Alume is a biotechnology company founded in 2017 that is developing nerve-targeted pharmaceutical agents for surgical and therapeutic use. The company’s first product, ALM-488, is a fluorescently labeled peptide-dye conjugate that makes human nerves “glow,” helping surgeons reduce injury to critical nerves during surgery. During surgery, inadvertent injury to nerves leads to loss of function, including paralysis, numbness and decreased quality of life. Alume intends to develop agents including ALM-488 to be used as an adjunct during surgery to help surgeons see nerves better compared to current visualization with white light alone. Alume’s technology has the potential to improve the accuracy of nerve identification, decrease operative time, and lead to better outcomes for patients.

Alume was founded by Quyen Nguyen, MD, PhD, with co-founders Brett Berman, MD, FACC, Chrysa Mineo and scientific co-founder Mike Whitney, PhD. Intellectual property underpinning Alume was licensed from the University of California, San Diego (UCSD), where Dr. Nguyen is a Professor in the Department of Surgery and Director of the Facial Nerve Clinic. Dr. Nguyen is board certified in both Head and Neck Surgery and Neurotology/Skull Base Surgery. Dr. Nguyen’s interest in molecular imaging for surgical navigation began during her fellowship at UCSD where she collaborated with Dr. Roger Tsien (1952-2016), Nobel Laureate, Chemistry 2008. She has been awarded the Presidential Early Career Award for Scientists and Engineers (PECASE, April 2014). Dr. Berman is a cardiologist with board certifications from the American Board of Internal Medicine in Cardiovascular Disease and in Clinical Cardiac Electrophysiology.

About BioBrit, LLC
BioBrit, LLC is a life sciences investment firm based in La Jolla, CA. Since its inception in 2012, BioBrit, LLC has invested in more than 50 companies, including AnaptysBio, Mirati Therapeutics, Sienna Biopharmaceuticals, Castle Biosciences, and Equillium.