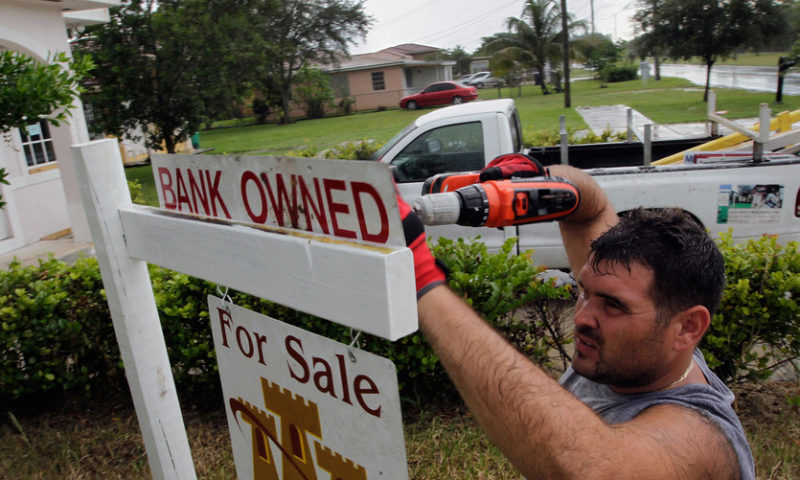 Maria Landi, a 75-year-old retired insurance specialist, and her husband John, had been making payments on their East Brunswick, New Jersey home for 40 years when Wells Fargo foreclosed on it in 2010.

At the time, John Landi was forced into early retirement by the financial crisis from his job as a producer at ABC DIS, +0.78% and 20/20. The couple could no longer afford to make the monthly payments on the home where they raised five children, and were forced out in 2013 after three years of trying and failing to apply for loan modifications from Wells Fargo WFC, -0.49%

“We had countless holidays, baptisms, communions, confirmations and birthdays in that home,” Maria Landi told MarketWatch. “We had graduations, engagements, weddings and, of course, end of life moments. Our blood, sweat and tears went into this structure. Renovations, additions and many accommodating improvements were put into this, what some may call just a building.”

The home was initially purchased for $49,000 and was later valued at $750,000 after the Landis renovated it and made additions to the home. But after the Landis got the foreclosure notice from Wells Fargo, it was appraised at just $450,000, far below what the Landis owed on their mortgage.

’Our blood, sweat and tears went into this structure. Renovations, additions and many accommodating improvements were put into this, what some may call just a building.’
Maria Landi, a 75-year-old retired insurance specialist, who lost her home to foreclosure

In the following years, the Landis attempted to apply for loan modifications and filed for bankruptcy before finally being forced out of the home. Theirs was just one of the nearly 7.8 million foreclosures happened during the 10 years between 2007 and 2016, according to CoreLogic CLGX, -0.92%

After they had to leave the home, the Landis “begged” several landlords to give them a chance despite their poor credit. They eventually found someone to rent them a home while they both continued to work and tried to recover financially.

The Landis moved to Florida where they bought another home. Because their credit was destroyed by the previous foreclosure, Maria Landi said they now pay a mortgage with a very high interest rate.They now pay $1,950 per month through an FHA mortgage from Quicken Loans.

“Wells Fargo has made a fortune off of the backs of those who would seek to reclaim their dignity,” Maria Landi said. She added that Wells Fargo is looking into their case after she contacted them to say she believes their home was erroneously foreclosed on due to the computer glitch.

(Wells Fargo did not respond to a request for comment on any of the cases mentioned in this article.)

Homeownership has not recovered from the financial crisis

Others affected by the crisis weren’t so lucky. Although the homeownership rate has rebounded in recent years, it still remains well below the high it reached before the foreclosure crisis. As of the second quarter of 2018, 64.3% of households owned their home, as opposed to 69.2% back in the fourth quarter of 2004, when real estate bubbles were forming in California, Florida and other areas that were later devastated by the housing crisis.

Matters are even worse for black, Hispanic and low-income Americans though. Today fewer than half of black households (41.6%) and Hispanic households (46.6%) are homeowners, while just over half of households whose income is less than the national median family income own where they live (50.2%).

This is a reflection of how the foreclosure crisis began, said Jesse Van Tol, chief executive of the National Community Reinvestment Coalition, a group of grassroots organizations focused on promoting community development and improved access to financial services.

“The foreclosure crisis really started as a subprime lending crisis,” Van Tol said, referring to the extremely risky loans lenders made to borrowers with less-than-stellar credit in the lead up to the crisis. “Low-and-moderate income people and people of color were disproportionately targeted for these bad loans.”

Crisis-era foreclosures and short sales were concentrated in these communities. That not only left millions of these Americans without a home, but also significantly lowered home prices in these areas. While housing markets in cities like San Francisco and Seattle have recovered, the areas where these risky loans were common haven’t bounced back. In fact, they continue to see higher levels of new foreclosures, Van Tol said.

Losing a home can lead to fewer opportunities

Following the crisis, banking regulations forced lenders to tighten their lending activities. Today, it is generally only borrowers with the most pristine credit who can get a mortgage. But people of color and low-income households tend to have lower credit scores in general — foreclosure history notwithstanding. Now, those people have more difficulty getting a mortgage in the first place.

These forces have contributed to the expansion of the racial wealth gap. “Today for every $100 in wealth that a white family has, a black family has just over $5,” Van Tol said. “It’s a perverse story because these were the same people targeted for subprime loans in the lead up to the crisis.”

‘Today for every $100 in wealth that a white family has, a black family has just over $5. It’s a perverse story because these were the same people targeted for subprime loans in the lead up to the crisis.’
—Jesse Van Tol, chief executive of the National Community Reinvestment Coalition

The wealth generation that foreclosed homeowners missed out on in the intervening years doesn’t just affect their ability to save or build a retirement nest egg. It also limits their opportunities to move up the socioeconomic ladder.

Home equity was a resource to help fund a college education — but those who experienced foreclosure had to rely more heavily on student loans. That in turn has fueled today’s student loan debt bubble. Student debt now exceeds $1.5 trillion, a stark increase from roughly $671 billion at the beginning of 2008.

But there are other opportunities that are being left by the wayside. “Equity in the home has traditionally been relied on for people to start small businesses,” Van Tol said. “That kind of equity is a safety net of sorts for people who have unexpected expenses or are starting a new enterprise or venture. Aside from the nominal value of the lost wealth, those lost opportunities are the direct result of the housing crisis.”

Terri Wolcott, a sales representative at a vehicles vendor in Iowa, and her husband worked nearly 15 years to pay off their mortgage after they purchased their home in 1995. They had refinanced their mortgage on four occasions in that time, according to public records available from the Summit County (Ohio) Fiscal Office. In 2008, Wells Fargo purchased Wolcott’s mortgage from Platinum Capital Group, a mortgage lender based in Irvine, Calif.

In the mid-2000s, Wolcott and her husband encountered financial difficulty when she had her pay cut in half and he was laid off from his job as a chemical sales manager. When Wells Fargo failed to approve a loan modification in 2008, Wolcott says she was left essentially homeless.

She wasn’t the only one. A computer glitch at Wells Fargo may have caused more than 400 people to lose their homes, the company said in August. Between April 2010 and October 2015, a malfunctioning Wells Fargo tool miscalculated whether homeowners would qualify for a federally-backed program to modify mortgage payments and keep their homes. As a result, 625 qualified customers were denied a loan modification, causing at least 400 to lose their homes.

(A spokesman for Wells Fargo said the people whose homes were lost after being denied a modification may have been foreclosed on regardless.)

Wolcott said her case preceded that glitch and occurred in October 2009 when Wells Fargo told her that her family qualified for a loan modification through the Home Affordable Modification Program (HAMP) and instructed her to make three months’ worth of steady payments at a reduced amount. But after doing that, Wells Fargo denied the modification and claimed that she had failed to make full payment, even though Wolcott believes she met all requirements they had laid out.

Wolcott said she called Wells Fargo more than 100 times to determine why she was not approved but never got an answer. She believes she is one of hundreds of people affected by a computer glitch denying HAMP applicants loan modifications.

Nine months later, she chose to short sell her home quickly rather than face foreclosure. That short sale was still listed in her credit report when she last checked, Wolcott said.

‘It was a nightmare. These are things large companies need to respond to but they don’t care. When a glitch happens, it does not affect their executives but they literally put thousands of people out on the streets.’
—Terri Wolcott, a sales representative at a vehicles vendor in Iowa

Wells Fargo contends that its delinquency and foreclosure rates, both during the crisis and today, were below industry averages. “We make every effort to help our customers avoid foreclosure when they encounter financial difficulties and since the beginning of 2009 have provided more than 1 million mortgage modifications to help customer stay in their homes,” a company spokesman said in an email.

Wolcott said it took nearly eight years to get her credit score back to where it was before the foreclosure, and even longer to recover her health. At the time of the foreclosure, she had only $700 in the bank and her 401(k). She and her husband separated and she moved in with a friend, as her credit was too low to find a rental property. She lost weight and couldn’t sleep.

Wolcott was not alone. Maria Landi said she and her husband suffered mental and physical health ailments related to the foreclosure. In 2009, she had a pacemaker implanted due to problems she believes were exacerbated by stress.

The vast majority of studies examining the link between foreclosures and physical and mental health have come to the conclusion that the foreclosure process makes people sicker, according to a 2015 analysis from Alexander Tsai, a staff psychiatrist at Massachusetts General Hospital and professor at Harvard Medical School.

Another study estimated that every additional foreclosure in a ZIP code led to 0.8 more non-elective hospital or emergency room visits over the next year.

“It is like when a building starts to fall down and just crumples piece by piece,” Wolcott said. “It affected the relationship I have with my kids, it was a big cause of my divorce, and caused me major health issues.”

New chair to rein in Musk