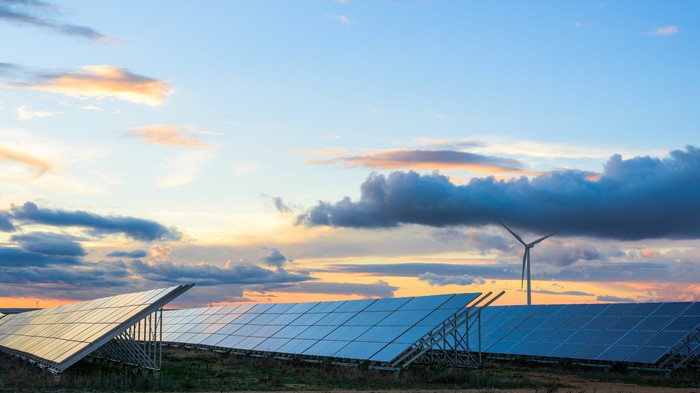 Solar stocks have taken it on the chin in 2018, but that could present a buying opportunity for shares of SolarEdge Technologies, First Solar, and TerraForm Power.

Some industries have had it better than others in 2018, and one of the industries not doing so hot right now is solar power. Year to date, the Invesco Solar ETF is down 18.6% in comparison to the S&P 500’s modest gain of 2.3%. For an industry that is supposed to be in hypergrowth mode, that is a rather disappointing performance. At the same time, though, that could be a great opportunity for investors to buy into an industry that has hit hard times but likely has a brighter future.

A growth stock trading at the price of a value stock

Tyler Crowe (SolarEdge Technologies): SolarEdge Technologies is a fascinating case of Wall Street fixating on short-term bumps in a long-term growth industry. The supplier of solar industry components has seen its revenue growth slow down a bit as the company recently reported revenue growth of 42%. That number by itself sounds great, but Wall Street was fixated on its year-over-year revenue growth numbers in the 60% to 80% range over the past three quarters and deemed this past quarter a disappointment.

Going through the company’s most recent earnings report, though, it appears that most of the causes for concern look overblown. For example, the slowdown in sales related mostly to customers buying in large volume and getting a discount on price, and a modest decline in gross margins was largely attributed to higher support costs related to a new product rollout. On a unit basis, the company’s sales continued at staggering rates and the company is expanding its component line by acquiring a lithium-ion battery supplier and an uninterruptible power supply component maker. The aim of these purchases is to build an integrated package of components for residential and commercial solar installations that will optimize power generation, storage, and consumption.

So even though the company is still maintaining an annual revenue growth rate of more than 50%, is generating solid net income results and free cash flow, and is debt-free, Wall Street has hammered this stock down 45% in the past six months, with it trading at a P/E ratio of 15. That seems incredibly cheap for a stock that has the growth potential of SolarEdge Technologies.

Half this solar stock’s market cap is made up of cold, hard cash

Rich Smith (First Solar): I think November is going to be a fascinating time to watch how investors react to First Solar’s third-quarter earnings report — in fact, it already has been pretty fascinating.

First Solar’s Q3 report, which came out in late October, was a bit of a disaster. On the one hand, yes, sales more than doubled and First Solar traded in last year’s Q3 loss for a profit this time around. On the other hand, First Solar did some real damage to investor confidence in its stock when it cut guidance pretty savagely, reducing expectations for fiscal 2018 sales (now $2.3 billion to $2.4 billion), for profit margins on those sales (now about 19%, gross), for operating profit ($110 million), and for earnings per share ($1.40 to $1.60).

The fact that even after a strong Q3 these were the best full-year numbers First Solar could promise clearly worried investors, and sent the company’s stock tumbling as much as 15% post-earnings. And yet, its stock staged a comeback in early November, and is now actually trading higher than it did before earnings.

Why is that? I can’t help but think the fact that half of First Solar’s $4.6 billion market cap is now made up of cash ($2.3 billion, net of debt) has something to do with it. First Solar is profitable today and, with analysts forecasting nearly $310 million in net income next year, the stock sells for an enterprise value barely seven times its 2019 estimated income. With an estimated 12% long-term growth rate ahead of it, First Solar stock kind of looks like a steal right now.

Worries are easing, but stocks to remain jittery till year end