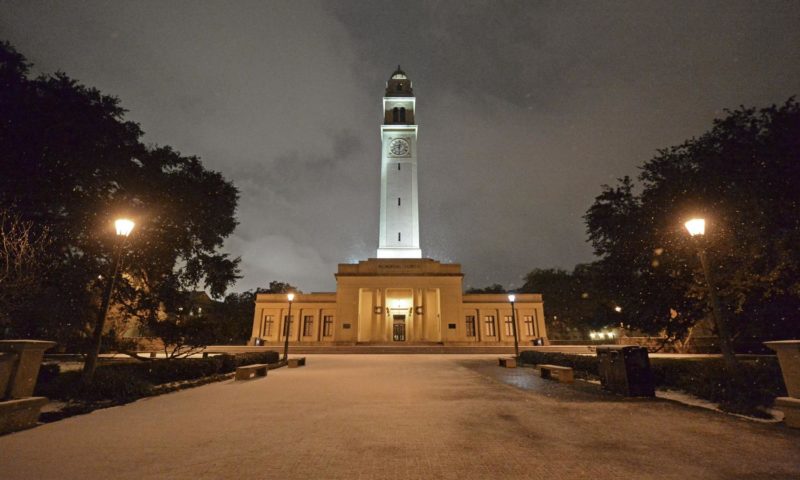 LSU is tied for 140th among national universities, according to college rankings released Monday by U.S. News & World Report.

Tulane University, which is a private school, is the highest-rated Louisiana college or university on the list at No. 44.

All of the rankings are in the 2019 Best Colleges report, which includes data on more than 1,800 schools in a variety of categories.

LSU is the state’s lone public school in the report’s top tier.

All four are in the University of Louisiana System.

In a statement, LSU President F. King Alexander downplayed the ratings. “While we are pleased to be recognized as the only public university in Louisiana ranked in the top tier, input-based rankings such as U.S. News are becoming more obsolete,” Alexander said.

“People are paying more attention to rankings that focus on outcomes like Washington Monthly and Forbes because that’s what really matters to students and their families,” he added.

The school on Friday issued a news release that again cited those two reports.

The Washington Monthly 2018 College Guide and Rankings put LSU in the top half of the Southeastern Conference, 90th among public universities and 30th among flagship universities nationwide.

LSU officials noted that, in the U.S. News report, the school ranked 70th among public universities and 35th among flagship institutions.

They said LSU moved up 15 spots from last year in alumni giving, to 87th overall, and that its students, according to the survey, are among those with the smallest college debt when they finish school.

Last week, The Wall Street Journal said LSU tied for 352nd among 500 public and private colleges and universities reviewed in its annual survey.

Princeton University is the top-rated national university for the eighth consecutive year, according to U.S. News.

The highest-rated public university is the University of Southern California.

LSU is rated 10th among schools in the SEC, according to U.S. News.

Among historically black universities, Xavier University in New Orleans was rated No. 5 and Southern University was tied for No. 31.

“Higher education consumers need solid information they can use to make informed comparisons among colleges and universities based on quality factors including affordability, safety and student success,” Reed said in a statement.

“While this report enjoyed a high profile because it was the first of its kind, today higher education leaders are focusing their attention on rankings like those in Washington Monthly that focus on more relevant factors for today’s students.” Reed said.

Jim Henderson, president of the UL system, downplayed the report’s meaning for his schools.

“U.S. News is always an interesting release and it can be a useful benchmarking resource, especially for research-intensive universities,” Henderson said. “Our institutions focus more on preparing students for life and career success while delivering impact, both economic and quality-of-life, to the regions they serve.”