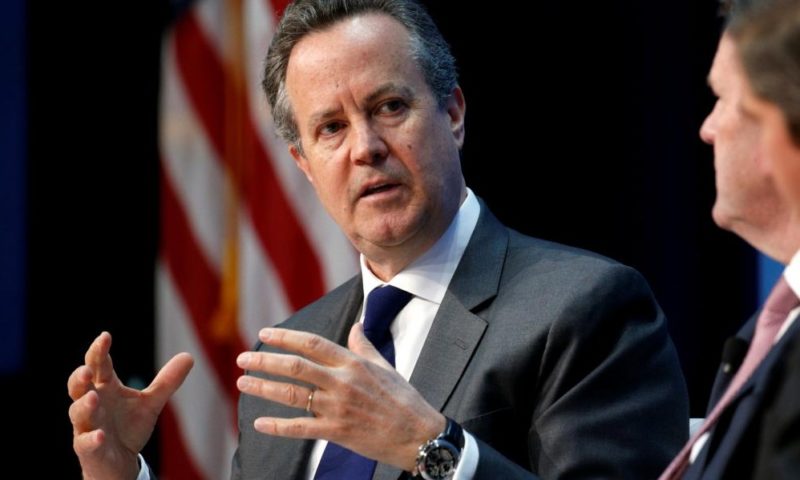 Ten years after a U.S. financial crisis debilitated world markets, financial services and ratings conglomerate S&P Global is putting processes in place to prevent it from happening again, President and CEO Douglas Peterson told in an interview on Friday.

“One thing that’s interesting that we’ve added in from those days is ways to connect the dots,” Peterson said in an exclusive interview with “Mad Money” host Jim Cramer.

“We have ways that our sovereign analysts, our financial analysts, our corporate analysts, energy, commodities, etcetera — they get together and they talk, not just in the region, but also globally,” the CEO said.

S&P Global — the sprawling corporation behind Standard & Poor’s, S&P Global Market Intelligence, S&P Dow Jones Indices and countless other benchmarks and financial technology services — became embroiled in the aftermath of the 2007 and 2008 recession.

The company’s Standard & Poor’s Financial Services division paid more than $1.3 billion in 2015 to settle a lawsuit led by the Department of Justice that accused the segment of defrauding investors using inflated ratings that miscast the credit risks associated with mortgage-backed securities.

Now, Peterson said his company’s over 1,500 analysts around the world are being more diligent about looking for worrisome trends.

Still a highly accredited security and bond rating service, S&P Global has also been involved in talks with China despite the hotbed of trade disputes between the People’s Republic and the United States.

The relationship between the company and the Chinese government — for which S&P has begun building a customized ratings system that has worried some investors — speaks to the narrative of China chasing legitimacy and establishment amid global economic disconnect.

“It’s still essentially a bank market when you look at their financial markets. Most of the corporate debt is on bank balance sheets and even the loans, even the bonds are on bank balance sheets,” Peterson said of China. “They need to start incorporating themselves into the global economy and that means they need to have a bond yield, they need a yield curve, they’ve got to have a credit risk curve, they have to open up their capital account.”

Adding that China being “thoughtful” about its financial development, Peterson told Cramer that the relationship would likely amount to more than just an official rating from S&P.

“We think that they’re going to be looking at not just the ratings, but also the data products and other market analytics as well,” the CEO said.

S&P Global’s shares sank slightly into Friday’s close, settling at $206.88. The company’s latest analysis showed U.S. corporate debt at a record $6.3 trillion, a sign that worried some on Wall Street given the high levels of leverage.

Goldman admits it was wrong on Apple, boosts stock outlook by 20 percent